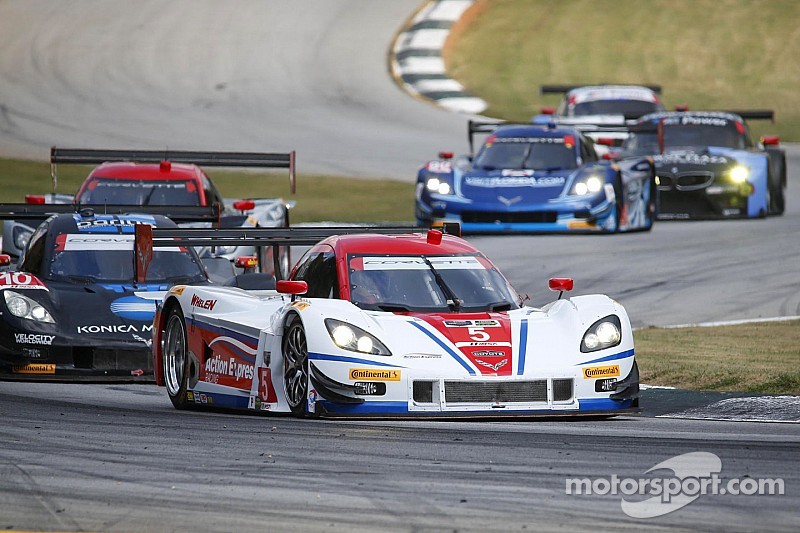 This 10-hour race will decide the various champions in the Tequila Patrón North American Endurance Cup.

The IMSA TUDOR United SportsCar Championship 2014 season will come to a close at Road Atlanta with the 17th Annual Petit Le Mans Powered by Mazda. This 10-hour race will not just decide the season long championship chases in all of the classes, it also will decide the various champions in the Tequila Patrón North American Endurance Cup.

In the Prototype ranks, the Action Express Racing Corvette DP pairing of Christian Fittipaldi and Joao Barbosa, by virtue of their outstanding season thus far, are on the verge of clinching not just the season-long team and drivers’ championships, but also the Patrón Endurance Cup.

Their 22-point lead in the overall TUDOR Championship race is sufficient enough that all they have to do is start the race, drive a minimum of 45 minutes and they will be champions. In the Patrón Endurance Cup, the pair can clinch with strong results in the early race segments, as points are rewarded at the 4-hour and 8-hour marks of the race, as well as at the end of the race.

In the Prototype Challenge (PC) class, CORE autosport drivers Jon Bennett and Colin Braun have already clinched the drivers’ title, and by sweeping all three previous Patrón Endurance Cup events will bring home that title by starting the race, along with James Gue who has driven as the team’s third driver in the endurance races. In the season-long team chase, only 8Star Motorsports has a chance to bypass CORE.

It is in the GT classes where the title chases become complicated, as both GT Le Mans (GTLM) and GTD (GT Daytona) championship chases will likely go right to the checkered flag.

The GTLM battle is intense and pressure packed, as Dodge Viper SRT, Corvette, Porsche, BMW and Ferrari are all fighting for honors. Based upon their strong results at COTA, the No. 93 Viper team has vaulted into the lead, with Jonathan Bomarito and Kuno Wittmer leading Corvette Racing’s Antonio Garcia by seven points in the drivers’ chase.

In an effort to maximize its chances of a GTLM drivers’ title, the SRT team elected to split the season-long pairing of Bomarito and Wittmer. Bomarito remains in the No. 93 Viper, which he will co-drive with Dominik Farnbacher and Rob Bell, while Wittmer moves to the team’s No. 91 entry alongside c and reigning Indianapolis 500 winner Ryan Hunter-Reay.

The highly valued GTLM manufacturers’ title is all tied up between Viper and Porsche, with Corvette another eight points back.

The Patrón Endurance Cup chase is even tighter. Thanks to strong earlier season results, Oliver Gavin and Tommy Milner lead the drivers chase by a single point over a group of five drivers. In all, 13 drivers are within 13 points of each other.

GTD is also very tight, with Turner Motorsport BMW driver Dane Cameron heading the drivers chase by four points over Leh Keen and Cooper MacNeil in the Weather Tech Porsche 911 GT America from Alex Job Racing. AIM Autosport, which leads the Patrón Endurance Cup handily, has its Ferrari drivers – Townsend Bell and Bill Sweedler – third in the season long points. In the manufacturers’ championship, Porsche, which is going for the double between GTLM and GTD, leads BMW by a single point, while Ferrari is another two points back.

My biggest concern would not be how much we can improve the car – I’d be more concerned that we’d wad the car up in the wet and not be able to make the race.

The TUDOR Championship teams took to the 2.54-mile Road Atlanta circuit for practice Thursday morning. Previously, the teams had an opportunity to test earlier in the week and Thursday would be for fine tuning. Not this year.

Track time for the TUDOR Championship cars is much more restricted this season. To make things more difficult, the weather forecast for Friday is questionable. That said, Saturday’s forecast calls for fall-like temperatures, which would provide nearly perfect racing conditions.

“It puts some further importance on what we do today,” said Risi Competizione Ferrari Team Manager Dave Sims. “It is a long race and qualifying position isn’t as important here as at many other races in this series, so what is important is getting the car set up.

“With the forecast looking pretty wet on Friday, it will be tough to get any useful running in. In fact, if we were to go out on Friday, my biggest concern would not be how much we can improve the car – I’d be more concerned that we’d wad the car up in the wet and not be able to make the race.”

That puts additional pressure on the teams to nail the set up as soon as possible and also be as efficient as possible in the use of available track time.

The Thursday morning session was clean throughout the one-hour session. Jordan Taylor led a Corvette DP 1-2-3 at the top of the grid, while Wolf Henzler brought the Falken Porsche through to lead the GTLM class. His time was .219 seconds quicker than the Porsche North American entered effort.

The teams have one additional hour practice session Thursday afternoon, to be followed by the traditional night practice, scheduled to take start at 7:30 pm ET.