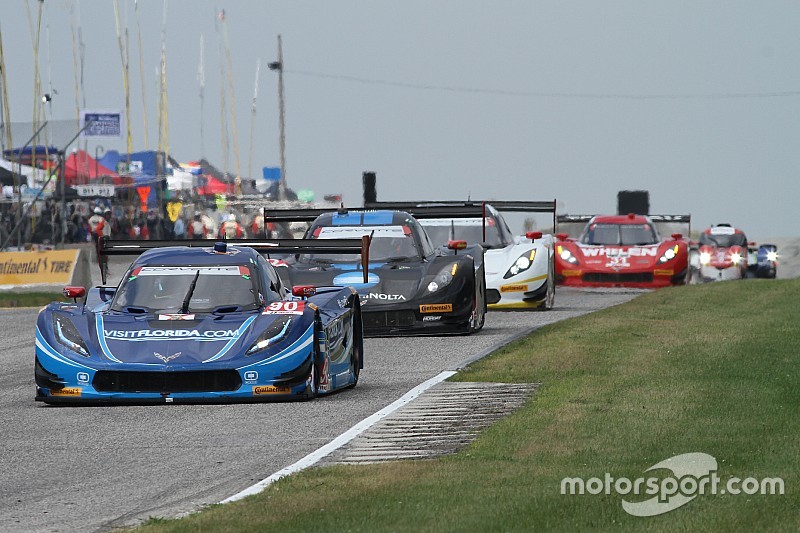 Daytona Beach, Fla. – Only two races remain in the 2015 Tudor United SportsCar Championship season, and the championships in all four classes are still up for grabs entering the Lone Star Le Mans, set for Saturday, Sept. 19 at Austin’s Circuit of The Americas.

Highlighting the title battle is the lead Prototype (P) class, with only two points separating the top-three teams. Michael Valiante and Richard Westbrook, two-time winners in the No. 90 VisitFlorida.com Corvette DP, lead the two Action Express Racing pairings. Defending champions Joao Barbosa and Christian Fittipaldi of the No. 5 Mustang Sampling Corvette DP are second, one point behind, 248-247. Another point back with 246 are Eric Curran and Dane Cameron, drivers of the No. 31 Whelen Engineering/Team Fox Corvette DP.

It’s the last sprint race of the season so you’ve got to nail everything perfectly because you don’t have time to recover.

“It would be nicer if we had a bigger gap to second and third but the way it is now it’ll be a fight until the end,” said Valiante, who joined Westbrook with victories at Mazda Raceway Laguna Seca and Watkins Glen International. “Hopefully, we roll in with a good car like we had at Road America, have a clean race and come away with a win there. We’d like to have a slight gap when we head to Petit Le Mans.”

The Tudor Championship season ends with the Petit Le Mans Powered by Mazda, set for Oct. 3 at Road Atlanta.

Barbosa and Fittipaldi finished third at Circuit of The Americas in 2014. After winning three races last season, their lone triumph this year was in the Mobil 1 Twelve Hours of Sebring Fueled by Fresh From Florida. However, they have finished on the podium a total of five times in the eight races so far this season. Including a second-place result last time out at Road America last month.

“We’ve got an exciting end of the season coming up with three cars separated by only two points,” Fittipaldi said. “Personally, I feel we are the team to beat. The competition is going to be tough. Anyone who wins is going to have to have some luck – the stars have to align a little bit. We’ll give it our best and race as hard as we can.”

Curran and Cameron have finished in the top five in all nine races this season. They earned their first victory of the season in May at Detroit’s Belle Isle Park and added a second victory Road America.

“Eric and I will really look to use Circuit of The Americas as a place where we can move up one spot or maybe jump to the lead in the championship standings,” Cameron said. “It’s the last sprint race of the season so you’ve got to nail everything perfectly because you don’t have time to recover. We’ve had strong runs lately with our Whelen Corvette DP, obviously the win at Road America in our last race, but we were extremely strong finishing second at Canadian Tire Motorsport Park as well.”

Scott Pruett and Joey Hand are fourth in the standings but are 16 points behind the leaders. The last victory for the No. 01 Ford EcoBoost/Riley was in the 2014 Lone Star Le Mans, where Pruett was joined by Memo Rojas. For 2015, Rojas joins Katherine Legge in the No. 0 Claro/TracFone DeltaWing DWC13, coming off a season-best sixth-place finish at Road America.

Other Prototype contenders include John Pew and Ozz Negri in the No. 60 Michael Shank Racing with Curb/Agajanian AERO Ligier JS P2/Honda, brothers Ricky and Jordan Taylor in the No. 10 Konica Minolta Corvette DP, and the two Mazda Motorsports Prototypes, the No. 70 Castrol/ModSpace Mazda for Tristan Nunez and Jonathan Bomarito, and the No. 07 Castrol/ModSpace Mazda for Tom Long and Joel Miller.

Colin Braun and Jon Bennett hold a slim five-point lead in their bid to repeat as Prototype Challenge (PC) champions. The drivers of the No. 54 CORE autosport Flex-Box/Composite Resources ORECA FLM09 have finished in the top four in all eight races this season, winning at Canadian Tire Motorsport Park.

“Circuit of The Americas will be an important race, but we have been there many times before and we're prepared,” Braun said. “All the races pay the same points, so we just have to focus on improving and working hard.”

Sitting second in the PC standings, trailing 253-248, are Mike Guasch and Tom Kimber-Smith, winners of three races this season in the No. 52 PR1/Mathiasen Motorsports Cuttwood ORECA FLM09. They won the two longest races on the schedule – the Rolex 24 At Daytona and Mobil 1 Twelve Hours of Sebring Fueled by Fresh From Florida – and the shortest, the two-hour sprint at Lime Rock Park.

Starworks Motorsport will field two cars at Circuit of The Americas. Renger van der Zande, a two-time winner in the No. 8 Martini ORECA FLM09 will co-drive with a driver still to be named. The team’s second entry, the No. 80 machine, will be co-driven by Alex Popow and Mike Hedlund.

Other PC contenders include Mikhail Goikberg and Matt McMurry in the No. 85 Vroom.com/Red Line Oil/The Amazing Flameless Candle/Name Silo ORECA FLM09, and a pair of entries from BAR1 Motorsports, the No. 16 Top 1 Oil/Jet Suites/Edvisors ORECA FLM09 for Todd Slusher and John Falb, and the No. 61 entry for Don Yount and Ryan Lewis.