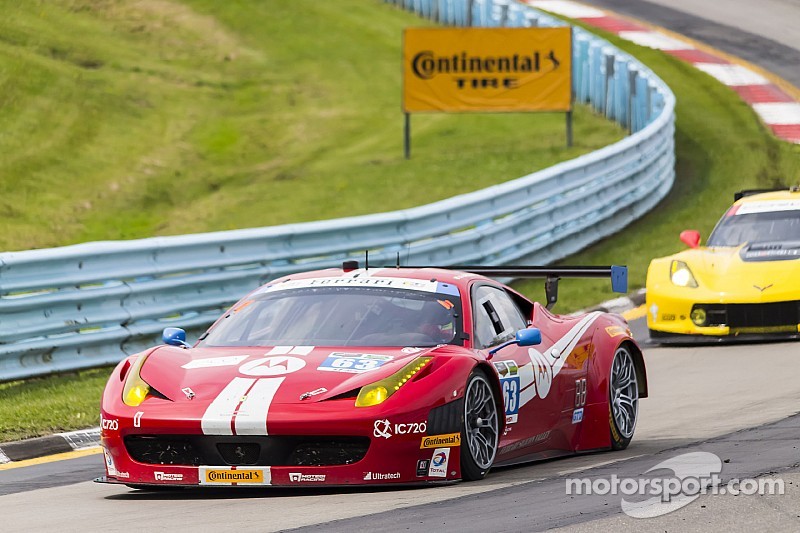 Los Angeles, California) - Just as it did two weekends ago, Scuderia Corsa will compete in two very different places this weekend.

Near Toronto, the no. 63 Scuderia Corsa Ferrari 458 Italia driven by Alessandro Balzan and Jeff Westphal will compete in the TUDOR United SportsCar Championship round at Canadian Tire Motorsports Park.  It will be both drivers' first visit to the circuit, noted for being one of the most challenging in North America with a collection of high-speed corners and large elevation changes.

Balzan and Westphal finished in fifth position at the previous round at Watkins Glen International, putting in a strong performance after the no. 63 Scuderia Corsa Ferrari 458 Italia suffered contact in the early stages. That finish, along with their victory at the previous round at the Raceway at Belle Isle, has pushed them to sixth in the TUDOR Championship's GT-Daytona championship standings.

The CTMP circuit produces a unique set of circumstances, according to team engineer Joe La Joie.

"Canadian Tire Motorsports Park is a fairly fast track having an average speed of over 115 mph," said La Joie. "Turns 1, 2, and 4 are all long sweepers between 100-to-130 mph and produce 2 lateral G's.  Therefore, the car has to be well balanced in high speed with enough support to handle these turns.  Considerations must be made with the gearing so that the downshifts and throttle applications do not unsettle the car here either.

"Turn 5 is the slowest turn on the track and leads to the longest straight. The lead in to turn 5 is challenging because of the decreasing radius of Turn 4, a heavy brake zone, and a tricky double apex.   The car must accelerate well out of turn 5 with good throttle application and proper gearing in order to drag down the back straight which leads to turns 8, 9 and 10."

While Balzan and Westphal compete at CTMP, the Scuderia Corsa drivers who compete in the North America Ferrari Challenge will be in action at another great North American circuit - Road America in Elkhart Lake, Wisconsin.

Driver Chris Ruud, who lives near the circuit in Milwaukee, currently leads the Coppa Shell championship ahead of teammate Jon Becker. The two drivers have taken nine out of a possible ten victories in the Coppa Shell class this season. They will be joined by John Horejsi, who competes in the Trofeo Pirelli class.

"We anticipate that we will have a big challenge on our hands at CTMP with the high level of competition in the GT-Daytona class as well as the big differences in speed with the Prototype cars", said Giacomo Mattioli, team owner of Scuderia Corsa.

"Alessandro and Jeff have been doing a fantastic job, as has the crew. In Ferrari Challenge, Chris and Jon have been very impressive and are first and second in the Coppa Shell championship. They are pushing each other very hard and have almost swept the season, while John has been making huge strides after being away from racing for several years. Hopefully after the end of the weekend, we are celebrating several wins for Scuderia Corsa!"

Scuderia Corsa will remain busy after the weekend, as team Sporting Director Stefan Johansson will then take part in a Ferrari Driving Experience event at Mont Tremblant that is exclusively dedicated to clients of Ferrari Beverly Hills and Ferrari Silicon Valley.

Risi looking for a championship boost in Canada