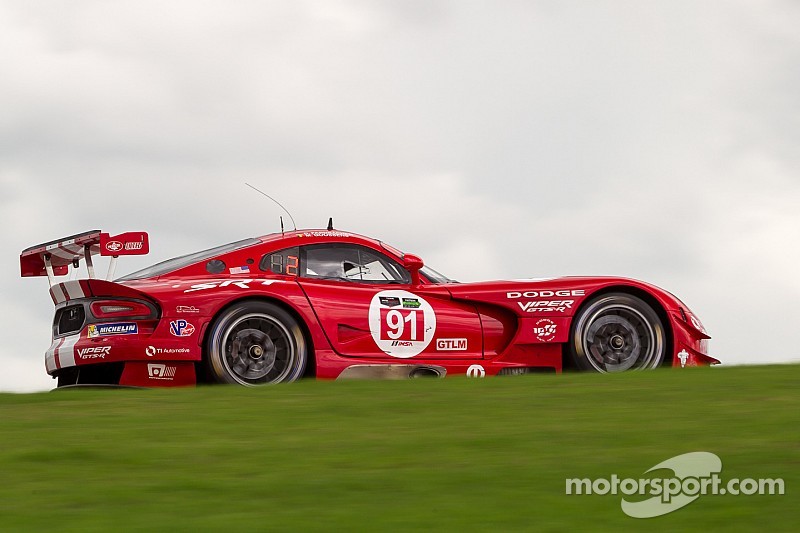 Drivers Dominik Farnbacher and Kuno Wittmer will swap Dodge Viper SRT GTS-R race vehicles for the championship-deciding race at Road Atlanta. Wittmer, who is tied with teammate Jonathan Bomarito for the GTLM class points lead, will co-pilot the No. 91 Viper with Marc Goossens, while Farnbacher will move to the No. 93 entry with Bomarito.

By splitting the regular lineup for the No. 93 Viper in the 10-hour race, the new groupings give SRT two entries with a points leader and a greater chance to capture the driver's championship. The move will provide the team the insurance of having a points-leading Viper driver remain in the hunt should the sister entry have a setback.

In addition to the IMSA TUDOR Championship driver's title, SRT Motorsports is contending for the GTLM team and manufacturer championships. The No. 93 Viper leads the team standings with 300 points, and SRT is tied for first in the manufacturer's title rankings with 308 markers.

Bomarito and Wittmer have 300 points in the driver standings and SRT holds a seven-point advantage in both the driver and team rankings.

The advantage in driver and team points marks the first time SRT Motorsports has led the standings since the Viper's return to major sports car racing with a part-time schedule in 2012.

The SRT team took the points lead with a win in the most-recent race at Texas' Circuit of The Americas. The triumph in Austin, the second victory of the season for Bomarito and Wittmer, marked the fourth-consecutive race in which the No. 93 Viper bested the previous point leaders to surge in the standings.

Armed with their first-ever points lead, the Vipers now look to take the GTLM title with a solid result in the 10-hour season finale at Road Atlanta.

With podium finishes in each prior endurance contest, SRT Motorsports has confidence in the Viper's durability over the duration of the race. SRT is the only team to have finished on the podium in each endurance event.

The No. 91 Viper with regular drivers Farnbacher and Marc Goossens finished third in the second-opening Rolex 24 At Daytona and the No. 93 Viper team took second in the Twelve Hours of Sebring. In the third endurance event, the Sahlen's Six Hours of The Glen, the No. 91 and 93 Vipers finished second and third, respectively.

The No. 91 Viper ranks third in the GTLM driver and team standings.

Ryan Hunter-Reay, the 2014 Indy 500 winner and 2012 IndyCar champion, will join the lineup of the No. 91 Viper for the Road Atlanta race, while two-time European Le Mans Series champion Rob Bell will co-pilot the points leading entry. Bell and Hunter-Reay previously competed with SRT at Daytona and Sebring in 2014.

For Hunter-Reay, the 2014 race marks his second appearance at Road Atlanta with SRT Motorsports. The IndyCar champion drove the No. 91 Viper to an eighth-place result in Atlanta with Farnbacher and Wittmer in 2012.

Prior to the Viper's return to racing in 2012, factory-backed Dodge Vipers last captured major sports car championships 1999 and 2000 in the American Le Mans Series.

DeltaWing drivers and team ready for their hometown finale