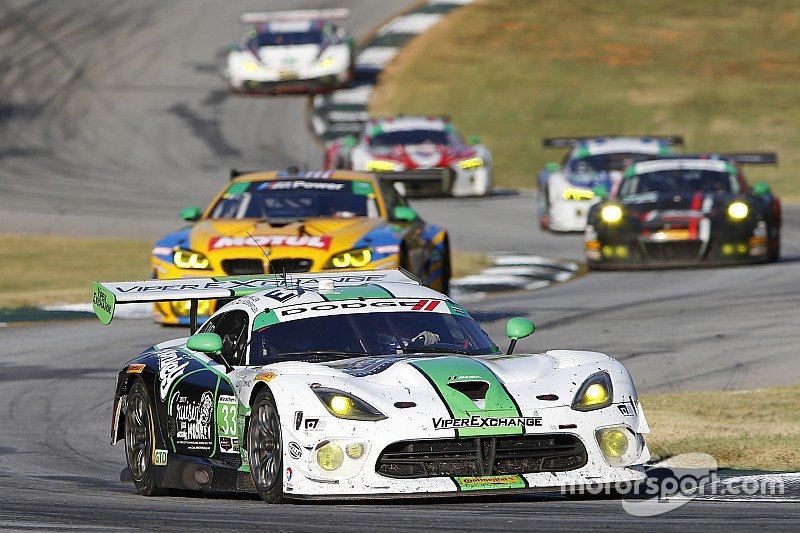 The swan song victory was earned from the pole and put a storybook ending on what has been a successful and winning career for Dodge Vipers in IMSA competition.

“I’m extremely excited,” Keating said. “I learned to race in a Viper. It’s an emotional thing to be racing a Viper for the last time in IMSA, put it on the pole and win Petit Le Mans. It’s the final race of the year and really special.”

Bleekemolen, who started from the pole after setting a new track record in Friday qualifying, and Keating combined to lead the first two hours of the 10-hour Petit Le Mans race.

Miller, the third driver in the rotation, kept the No. 33 in the lead pack throughout his driving stint, as did Keating in his second turn at the wheel. That paved the way for Bleekemolen to drive the final four hours of the race, during which he frequently led the competitive GT Daytona (GTD) class.

“This was one of the coolest things in my life and maybe the hardest race I have ever done” Bleekemolen said. “Four hours, no air conditioning and I had no drink for the last two hours. I was just totally dehydrated. It was a battle the entire time for every tenth of a second, like qualifying laps every lap for two-and-a-half hours. It was so intense, to win with Viper in its last IMSA race, it was awesome.”

Miller earned his first GT-racing victory in his fourth race co-driving with Keating and Bleekemolen. The trio first raced together last year at the 24 Hours of Le Mans.

“To have an opportunity to be part of this team, be here at Petit Le Mans and stand on the podium and share it with these guys is truly an honor,” Miller said. “There are a lot of drivers that could be in my shoes right now and they are not, and I am extremely thankful for that. My entire focus was making sure I did everything I could to give them a clean car and give Jeroen an opportunity to do what he did out there. That guy just shocks the hell out of me.”

“I’d like to take this moment to invite everyone to come cruise with us,” Keating said. “We have a bunch of drivers, including the championship winner in GT Daytona, coming on Cruisin’ With The Monkey the day after Sebring 2017. We can celebrate for a week in the Caribbean with Richard Rawlings, the whole Gas Monkey Crew and a bunch of the drivers.”