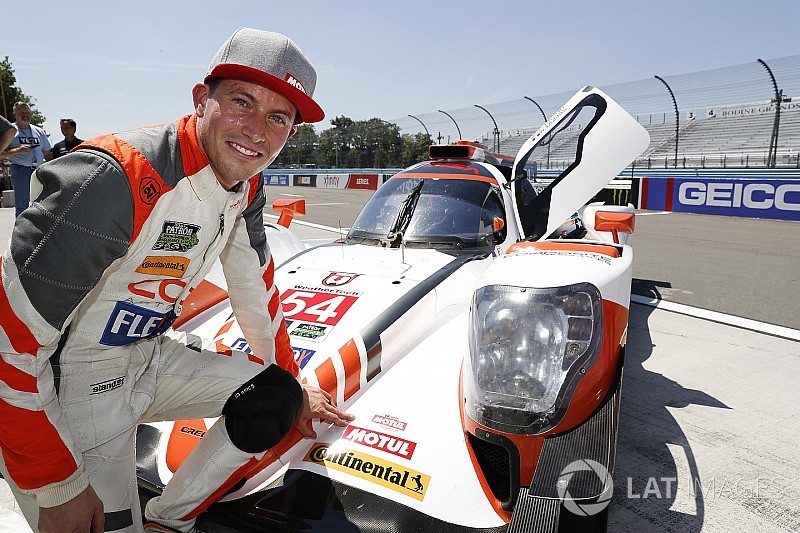 In a session in which 14 of the 15 cars beat the existing Prototype lap record for the IMSA WeatherTech SportsCar Championship, Braun took pole with a 1min32.350sec.

He and Di Resta thus consigned the two Acura Team Penskes to the second row, beating Ricky Taylor and Dane Cameron by 0.29 and 0.43sec respectively.

Simon Trummer was 0.67sec off top spot in the JDC-Miller Oreca, while Pipo Derani was sixth in the leading ESM Nissan, but had to pull off the track when his car suffered a suspected engine issue.

Gustavo Yacaman put the AFS/PR1 Mathiasen Motorsports Ligier into seventh, ahead of the fastest of the Cadillac DPi-V.Rs – the Wayne Taylor Racing entry of Renger van der Zande. The other Cadillacs will line up 11th, 12th and 14th.

Richard Westbrook put the #67 Ford GT on pole with the three fastest laps of the session to edge teammate Joey Hand by 0.111sec, and the only driver to duck under the 1min42sec barrier.

The cars came in two-by-two formation because next up were the Corvette C7.Rs – Tommy Milner 0.4sec behind top spot followed by Antonio Garcia.

The two Porsches will occupy the third row of the GTLM field, Earl Bamber ahead of Patrick Pilet, with Tom Blomqvist and Connor De Phillippi seventh and eighth in the BMW M8s – the latter 1.6sec from pole.

Jack Hawksworth put the #15 Lexus RC F of 3GT Racing on pole for the second time this season, lapping the course in 1min44.499sec on his sixth and final flier.

That was enough to beat Christopher Mies in the Audi R8 of Montaplast by Land Motorsport by 0.112sec, and his Lexus teammate Kyle Marcelli by 0.213.

The two Meyer Shank Racing Acura NSXs of Alvaro Parente and Lawson Aschenbach were fourth and fifth ahead of Scuderia Corsa’s Jeff Segal, ahead of Madison Snow in the Paul Miller Racing Lamborghini Huracan.