Oliver Jarvis put the #77 Mazda RT24-P at the top of the times in the last practice before qualifying for the Sahlen’s 6 Hours of Watkins Glen, grabbing a set of slicks in the final minutes to go fastest by almost 3.5sec. 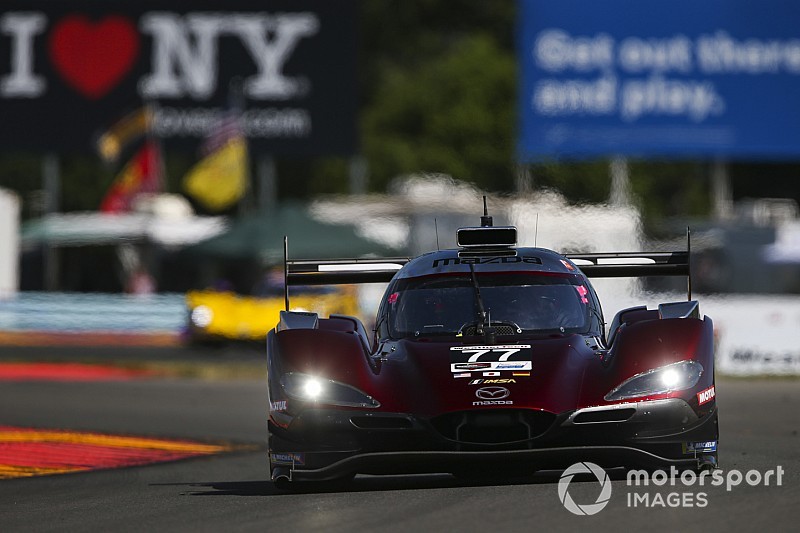 The Mazda Team Joest driver lapped the 11-turn 3.4-mile course in 1min43.279sec to beat Will Owen’s best in the Juncos Racing Cadillac DPi-V.R by 3.459sec. Renger van der Zande was next up in the Wayne Taylor Racing Caddy followed by the second Mazda steered by Olivier Pla.

Simon Trummer, who suffered an off yesterday, today beat JDC Miller Cadillac teammate Misha Goikhberg to fifth fastest, while Dane Cameron headed up Acura Team Penske’s effort but wasn’t lapping in the drier conditions at the end of th session.

Another team to take it easy in this session was Action Express Racing, whose Cadillacs turned only a total of 11 laps, compared with the 25 of the lead Mazda.

In GT Le Mans, Laurens Vanthoor and Patrick Pilet held sway in the two Porsche 911 RSRs until the dying moments when John Edwards took advantage of the dry track to slot his RLL BMW M8 into second place.

Richard Westbrook was fastest of the Ford GT drivers in fourth, ahead of the two Corvette C7.Rs.

In GT Daytona, Jack Hawksworth made a late jump to the top in his AIM Vasser Sullivan Lexus RC F, beating Parker Chase’s impressive effort in the Starworks Motorsport Audi R8 by just under 0.3sec, as open-wheel ace Aaron Telitz put both Lexus cars in the top three.

Christopher Mies was fourth in the Montaplast by Land Audi, while Corey Lewis turned the fastest Lamborghini lap for Paul Miller Racing, and Scott Hargrove was the fastest of the Porsche 911 GT3R runners.