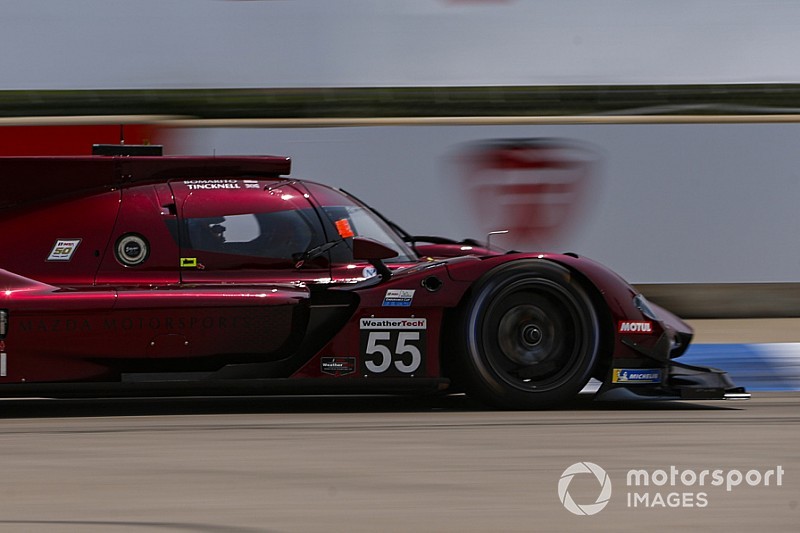 Castroneves’ co-driver in the #7 Acura ARX-05 Ricky Taylor had set the fastest lap until the ex-IndyCar star chipped two-tenths off that time. But with just a couple of minutes to go, Tincknell’s #55 Mazda Team Joest entry went just over 0.1sec faster to grab P1.

With Will Hardeman bringing out a red flag for a shunt in the #19 Moorespeed Audi R8, Tincknell’s time went unchallenged.

Behind Castroneves was teammate Dane Cameron who, along with Juan Pablo Montoya, has won the last two rounds of the IMSA WeatherTech SportsCar Championship. He was one-tenth quicker than last year’s polesitter, CORE autosport’s Colin Braun in the Nissan DPi.

Felipe Nasr was fastest of the Cadillac DPi-V.Rs, his top time in the #31 Action Express Racing entry being almost 1sec off Ticknell’s benchmark, but faster than Tristan Nunez in the second Mazda.

Mike Conway, preparing for his first IMSA race of the year after visa trouble left him unable to compete in the Rolex 24 at Daytona, put the #5 AXR Cadillac into seventh, just ahead of Renger van der Zande in the Wayne Taylor Racing Cadillac.

The two Ford GTs of Richard Westbrook and Dirk Muller topped the GT Le Mans class ahead of Oliver Gavin/Tommy Milner in the only Corvette C7.R to hit the track, while Laurens Vanthoor slotted the best Porsche ahead of the two BMWs.

The other Porsche had to go back to the paddock for rectification of a power steering problem.