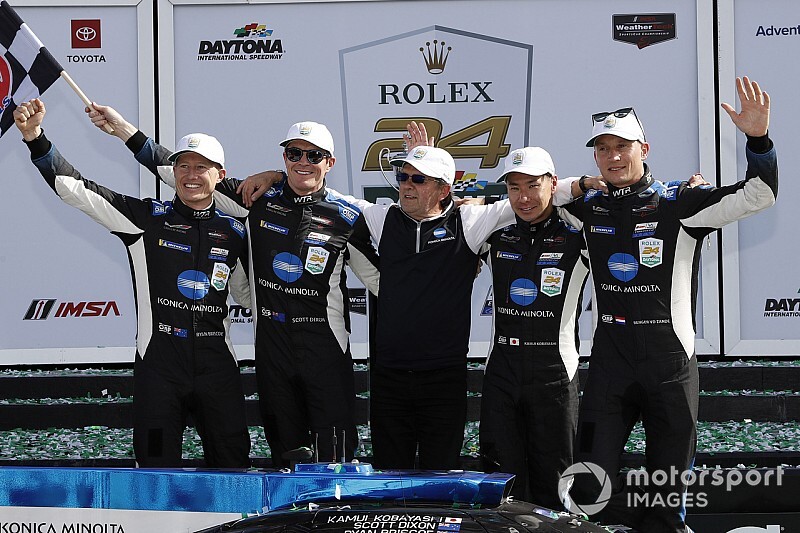 Winning Rolex 24 at Daytona team owner Wayne Taylor believes back-to-back success in the American sportscar classic proves his squad is worthy of taking a manufacturer-backed program to the Le Mans 24 Hours in future.

Taylor’s Konica Minolta-sponsored Cadillac DPi-V.R won the event by over a minute, despite a one-minute stop/hold penalty for passing the red light at the end of the pitlane, and a further setback with a power-steering issue, which caused Ryan Briscoe to make an unscheduled pass through the pits on Sunday morning.

“It was really, really impressive,” Taylor said of his team’s achievement to beat the Mazda Team Joest and Acura Team Penske factory teams at Daytona again. “What it should mean is that Cadillac should pay us a lot of money and say we’re the factory team. The good thing is, I’m 63 years old, and I can say whatever I want!

“And with the new discussions with IMSA and [Le Mans organisers] ACO, I can’t think of anything like going with this group to Le Mans and win overall.

“We were all excited when it was announced with IMSA joining with the ACO. Le Mans is always the ultimate. What I’m hoping this brings us is sponsors, which we all need. But this gives us a little bit more leverage to talk to our partners and manufacturers as well.

“If we can show we can consistently win these long-distance races, I see this more as a manufacturer hope than our corporate partners. Results are everything, but you have to strike really hard and strike fast.”

“It’s, as everybody knows, a difficult event to win,” said Taylor. “And this year was more difficult. We had a low car count and we knew we wouldn’t have as many yellows.

“At one point, we had lapped everyone except the second car and the yellow comes out and it changes the entire race. These drivers up here, I can’t say enough about them. They are superstars, there are no egos.

“For Max [Angelelli] and I, it’s our third win as team owners. To work with people like Scott Dixon, who I’ve known but always been too shy to talk to, and I can’t say enough about Kamui Kobayashi and Ryan Briscoe, my third son.”

On the subject of the opposition, Taylor reflected: “I believed the Mazda would be the car that shows the most. You don’t know what they are doing behind the scenes and where they are testing and they have really come through.

“The Acura was strange, I’m not sure why that happened. I’m sure with the Cadillac and the Dallara, it was because we’ve been around a lot longer; that helps.”