“We can’t be depressed by second,” says Corvette’s Garcia 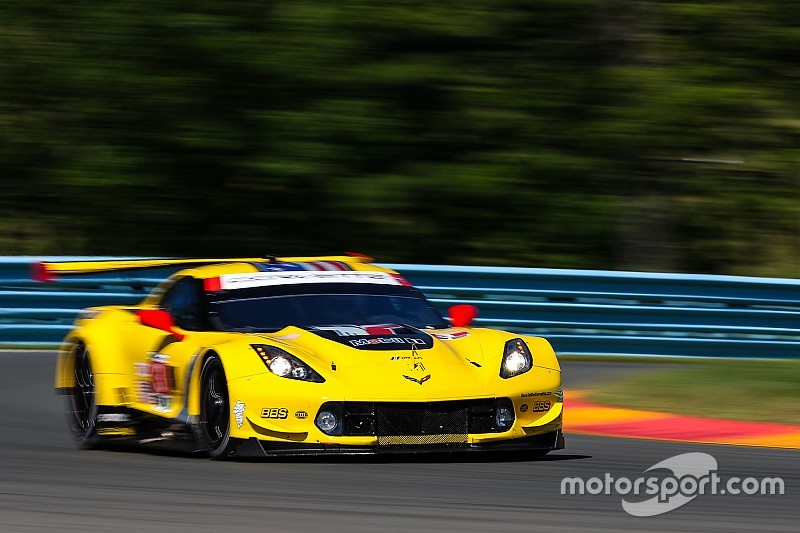 Corvette Racing’s Antonio Garcia says that the team wasn’t expecting to win the GTLM class of the Watkins Glen Six Hours, so leading several laps and finishing runner-up was a major achievement.

Although the Corvette C7.Rs of Oliver Gavin/Tommy Milner and Garcia/Jan Magnussen battled with the Porsche 911 RSRs throughout the first half of the race, it was a perfectly timed pitstop, just before a caution period, for the Gavin/Milner #4 car that vaulted it into the lead. Major fuel saving by Magnussen in a previous stint then also saved time on pitroad, and allowed Garcia to hunt down his teammate and grab the lead in class.

Following another round of stops, the Dirk Muller/Joey Hand #66 Ford GT hit the front, but after the final caution period, Garcia was still able to keep the Ford in sight and finished just 3sec adrift, and a similar distance ahead of the Patrick Pilet/Nick Tandy Porsche.

Said Garcia: “I think we had very close to a perfect race. You’ll always look back and think about things we could have done differently.

“I had fuel reserve for the last six laps or so. I don’t know how much fuel we were able to use at the end so maybe that didn’t allow us to go as hard at the end. We had to play it more conservative just in case. Perhaps we would have been able to be more aggressive and race the Fords harder.

“Thinking about where we have had lately and where we have been in practice and qualifying… to be fair we weren’t dreaming about a win. We wanted a good result, and today was almost a win where we led a lot of laps. We can’t be upset or depressed by second place. That’s a top job and result for everyone at Corvette Racing.”

Magnussen said: “We just didn’t have the pace when it mattered so we’ll work a little harder on it. Antonio did great in the heat and trying to get the Michelin tires to last – a fantastic job. The team did, as usual, everything they could in the pits to try and improve our position which they did. But second was all we could get out of it today.  I’m very happy with that for the points… fantastic. But after six hours of sweating, you want to win.”

Milner, who finished the race in fifth, said: “The two Fords at the start were definitely the quickest, and the Porsches were strong. Our qualifying position stymied them early. It was a phenomenal job by the 3 Corvette guys to hold on to second place at the end. Both the Porsches had a little bit of pace on us.

“We were struggling at the end with the brakes, so it took me a little bit to figure how to drive the car with the brakes in that condition. It’s something to look at for the future and see why we struggled there.”

Ford’s team manager and strategist Mike O’Gara was credited as providing the defining moment of the GTLM battle, after Hand was able to execute a strong fuel-saving strategy in the #66 Ford GT’s penultimate stint. That allowed the crew to deliver a faster stop than its principal rivals, so that Muller took a lead he’d hold to the checkers. It was the #66 car’s first win since last summer.

Palttala admits GTD win at the Glen was “above any expectations”