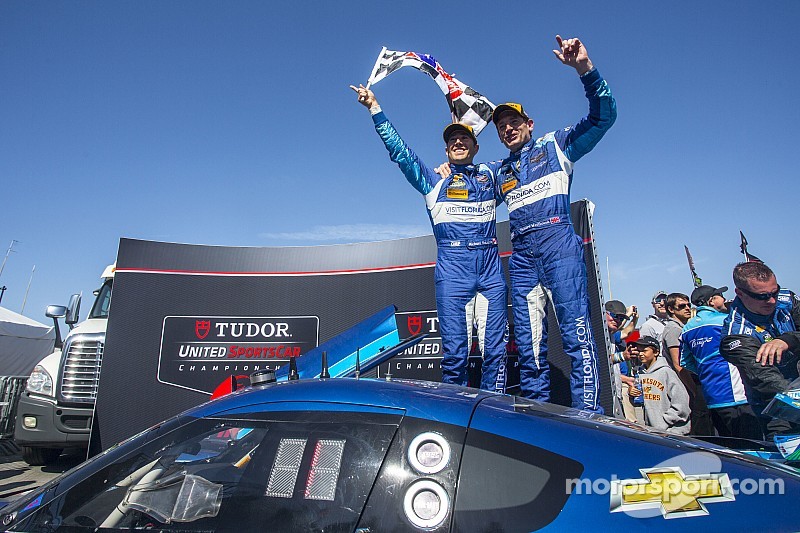 MONTEREY, California – Under sunny skies and cool temperatures, it was a perfect day for fans at the Mazda Raceway Laguna Seca, and it was a near-perfect race for the VisitFlorida.com No. 90 Chevrolet Corvette Daytona Prototype of Richard Westbrook and Michael Valiante.

The team won the TUDOR United SportsCar Championship’s Continental Tire Monterey Grand Prix Powered by Mazda, ending up with a 1.351-second margin over the winner of the last TUDOR Championship race two weeks ago at Long Beach, the No. 10 Wayne Taylor Racing Corvette DP of brothers Ricky and Jordan Taylor.

“We worked really hard for this,” said Westbrook, who brought the car home, winning for the first time since Watkins Glen in 2014. “We got out mojo back in Long Beach,” where the team finished third at the Tequila Patron Sports Car Showcase, “and I’m so pleased to get a win with this awesome team.” The win also gave the VisitFlorida.com team the points lead.

In third was the Michael Shank Racing with Curb/Agajanian No. 60 Honda Ligier JS P2, in that team’s strongest showing of the year. Fourth was the No. 5 Mustang Sampling Action Express Corvette DP, which won at the Mobil 1 Twelve Hours of Sebring.

No split field this year

Last year, the TUDOR Championship’s four classes were split into two separate races here, but this year, all 35 cars were on track for a single two-hour, 40-minute race on the tight, twisting 2.238-mile track. The difference in lap speed between the Prototype cars and the GT Daytona cars was typically 10 to 12 mph, so traffic was an issue all race.

Indeed, “Fighting traffic was a big factor,” said Ricky Taylor, and he said the fact that they had their final pit stop a few laps earlier than the No. 90 car coincidentally allowed the winning car to return to the track with less traffic to deal with. The slower GTD cars “were pretty disrespectful at times,” making it tough to get around them, he said. “But the majority of the time, it was good, hard racing.”

Also, there was a surprising absence of caution flags – there was only two, one on lap 20 for debris, another on lap 27 for the No. 45 car Flying Lizard Audi R8 LMS, which spun into a gravel trap. More cautions would have bunched the cars up, and given the faster cars a break before they reached the slower cars at the back of the pack. But that didn’t happen, despite a late collision between the Turner Motorsport No. 97 BMW and the WeatherTech Porsche sent both into a gravel trap.

In GT Le Mans, the two BMW Z4 GTLM cars of BMW Team RLL took first and second, with the winning car – the No. 24 John Edwards and Lucas Luhr, edging out the second-place No. 25 team car of Dirk Werner and Bill Auberlen who won two weeks ago at Long Beach. Third was the No. 911 Porsche North America 911 RSR.

Bruno finally gets a Laguna win

For the veteran Junqueira, it was his first win at Laguna. “This is one of my favorite tracks,” he said. “I’ve been on the podium five times, so it is good to finally be able to stand on the top step.”

In GT Daytona, Spencer Pumpelly and Patrick Lindsey qualified on the pole and went on to take the victory in the No. 73 Park Place Motorsport Porsche 911 GT America. It was a redemption for Pumpelly, who was leading the class in an Audi last year until the final lap, when the car race out of fuel. No mistakes this year – “The guys on pit road executed so well for us today,” Lindsey said. “This is a great validation for an amazing team.”

Second was the No. 48 Paul Miller Racing Audi R8 LMS of Christopher Haase and Dion von Molte. Third was the No. 23 Team Seattle/Alex Job Racing Porsche 911 GT America of Ian James and Mario Farnbacher, the winner at Sebring in the last race for the GTD class.

Next up for the TUDOR United SportsCar Championship: The Chevrolet Sports Car Classic at the Raceway at Belle Isle Park in Detroit, Michigan on May 29 and 30.

DeltaWing: Consistency, reliability and managing traffic keys to the race at Laguna Seca