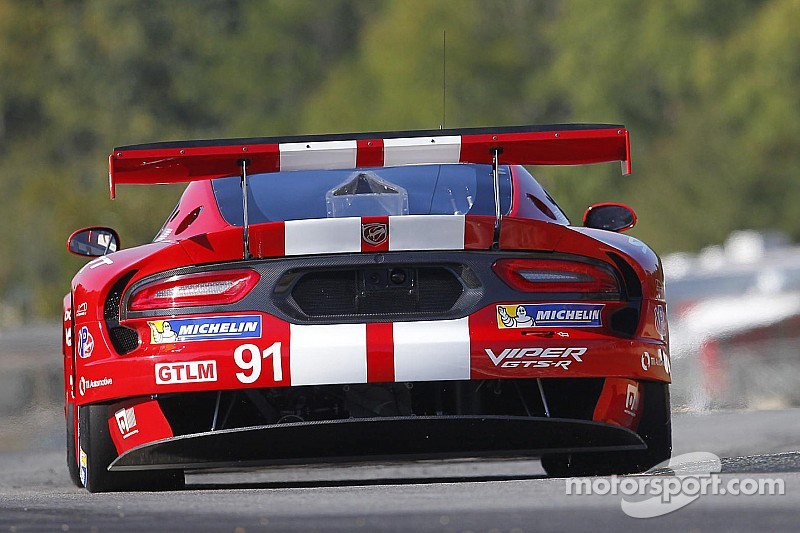 Yes, of course, it's money. But there's more to it than that.

Tell me, readers, if you have ever heard of a better indication of how quickly things can change in the corporate world of motorsports.

At 1 p.m. today, I did a telephone interview with Kuno Wittmer, who on Saturday drove a Dodge SRT Viper GTS-R to the TUDOR United SportsCar Championship GT-Le Mans season driver’s title and team title. We spoke of how the momentum from this past season would carry over into 2015, and how Wittmer’s driving this past season would undoubtedly keep him employed at Chrysler.

That’s when he got the call with the news the rest of us became aware of when the press release hit the wires 15 minutes later: Dodge was pulling the plug on its sports car racing program for 2015 and beyond.

“Our company has made a business decision to discontinue the SRT Motorsports Dodge Viper GTS-R racing program,” said Ralph Gilles, Senior Vice President of Product Design, Chrysler Group LLC. “We are very proud of the amazing achievements our fantastic teams, drivers and partners have achieved on track the last few seasons.”

Sound familiar? It should. In August of 2012, in a conference call with reporters, Gilles told us that with a “heavy heart,” the company would not return to NASCAR in 2013 – not in Sprint Cup, the Nationwide series or the Camping World truck series. Then the only full-time Dodge boys, Team Penske, promptly went out and won the 2012 NASCAR Sprint Cup Championship with driver Brad Keselowski.

With most manufacturers, the old adage went, “Win on Sunday, sell on Monday.” With Dodge it seems to be, “Win the championship on Saturday, cancel the program on Monday.”

So the Dodge Viper SRT GTS-R 2014 racing season concluded Saturday with the two-car SRT Motorsports team winning the team and driver titles. “SRT Motorsports won two of three championships contested in the class and finished second in the GTLM manufacturer championship in just its second full year of the program,” said today’s press release. It did not say, "Now, please clean out your desk and the guard will escort you out," but it could have.

Did SRT racing die so Vettel could live (at Ferrari)?

So where does this leave Chrysler’s racing program? If you really want to stretch the branches of the company’s family tree, there’s Ferrari in Formula One – is it possible that SRT’s racing program had to die to finance Sebastien Vettel’s salary at Ferrari next year? No, but it’s fun to think about.

Nor have they made a call on if, and to what extent, they will support privateer Ben Keating, whose lone Riley-built number 33 Viper team in the TUDOR GT-Daytona series has performed well above expectations, even after his only car burned to the ground at Sebring.

Keating and his team won the next-to-last race at Circuit of the Americas, a feather in the cowboy hat for Keating, since that is his home track. “I’d like to be back in the series with a Viper next year,” Keating told Motorsport.com, but he needs to see if the numbers add up.

That’s two sets of numbers: One is money, the other is the series' “Balance of Performance,” which penalizes fast cars with weight, aero or engine restrictions so slow cars can win, too.

With the only Viper out there – and Keating has heard of no other teams looking to run a Viper in GT-Daytona, especially now – he is afraid, and rightfully so, that he won’t have the lobbying power the Audi, BMW, Porsche, Aston Martin and Ferrari teams have when it comes to whining about BoP. With Dodge at least in the GT-Le Mans class with a factory effort, IMSA had to pay attention to the brand.

Will they if it’s just Ben Keating? “I feel sort of like I might have a target on my back,” he said.

Money-wise, there was an “economy of scale,” Keating said, in having two other SRT Vipers at the track, with the attendant engineers and parts availability. “Plus,” he said, “they were trying to figure out the same track I was,” and the three teams could share information.

Now, Keating would be a lone wolf. Or lamb. And frankly, with Dodge not racing, and consequently perhaps not publicizing the Viper, Keating – the world’s largest Viper dealer – can’t be pleased with that. Viper sales have been slow anyway, hence the $15,000 price cut the company announced a few weeks ago.

Bottom line: Keating said he feels as though he has a chance to win, he will probably be back. If he can’t, he won’t.

So the only racing Chrysler will do for sure is in a straight line, as it supports some Dodge NHRA Pro Stock and Funny Car teams, including Matt Hagan, whose Funny Car won last weekend at Maple Grove in Pennsylvania, giving him the points lead. Pat Caporali, who handles MOPAR racing publicity, said the company will support its teams for sure next year and probably beyond, and also just signed a multi-year deal to keep sponsoring the Mile-high Nationals in Denver. MOPAR, she said, is separate from Dodge and SRT racing programs, and “drag racing reaches MOPAR customers directly,” she said.

It’s a sad situation for Dodge and Chrysler race fans, and likely no one is more miserable about it than Ralph Gilles, a very fast racer himself, and the man most responsible for the current Viper – which is a splendid car, on and off the track. And I’ve been lucky enough to test-drive plenty of Vipers on the street and track since 1991, and to race in the Viper Challenge series. (Where I once beat Ben Keating! After his car overheated and blew up. He fixed the car and almost lapped me in the next race.) The Viper may well be my favorite car, and I’ve tested thousands of cars since 1984.

So what really happened?

Several sources suggest that Tim Kuniskis, president of Dodge and SRT, just isn’t much interested in racing, and that’s what happened to the Viper program. What will happen to the Viper itself? I hate to speculate. But if I did, I’d expect some sort of replacement that could be a re-badged Alfa-Romeo at best, a re-bodied Charger/Challenger at worst.

So what happened to the NASCAR program? That came all the way from the Italians at Fiat, including Chairman and CEO Sergio Marchionne, who reportedly found the Americans “arrogant” about NASCAR, even though Roger Penske was ready to sign for more seasons. Penske went to Ford not because he insisted on moving to Ford, but because Chrysler insisted on not being in NASCAR any longer. Although right now, that move to Ford is looking pretty good.

Viper didn’t go to the 24 Hours of Le Mans this year because they weren’t able to come up with enough sponsorship to cover the expenses, so the Italians at parent company Fiat stamped “cancelled” on the Viper’s passport.

So the cool Chevrolet Corvette vs. Dodge Viper battle is, once again, history.

As Kuno Wittmer might say, and did: “It sucks.”

The good news: Kuno Wittmer is a champion. The bad news: He's unemployed.