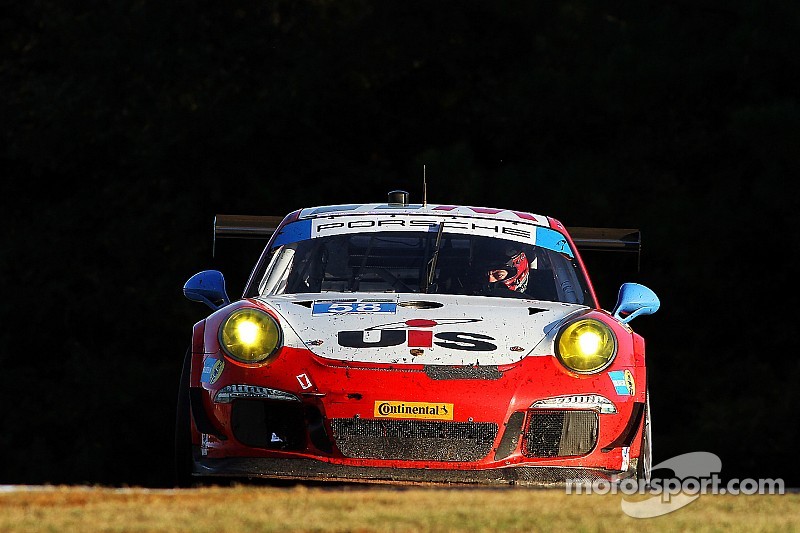 Wright Motorsports is stepping up for the full season of TUDOR United SportsCar Championship competition in 2015. The Cincinnati, Ohio-based team will partner with racer/actor Patrick Dempsey for the four Tequila Patrón North American Endurance Cup races under the Dempsey/Wright Motorsports banner, and will run the remaining races with regular drivers Madison Snow and Jan Heylen in the No. 58 Porsche 911 GT America.

Wright Motorsports joined forces with Dempsey Racing during the 2014 season. The team finished the year on a high note, finishing third, third, fourth and second in the final four races of the season. The No. 58 Porsche – which opened the season with a third-place finish in the Rolex 24 – placed sixth in the team standings, while the No. 27 Dempsey Racing entry finished 13th.

Wright’s credits include crew chief on the winning GT2 car for the 1996 Twelve Hours of Sebring with Larry Schumacher, Will Pace and Andy Pilgrim; preparing the winning GT2 car in the 1998 Rolex At Daytona for Franz Konrad; taking third in the 2009 Rolex 24 under the Wright Motorsports banner; and winning four driver and three team titles in World Challenge, ALMS and GRAND-AM.

John, how did you get together with Patrick Dempsey last season?

“First of all, I want to say that all of this is about my team. With as much as we do, I couldn’t do it without good people. To be honest with you, right now they’re prepping the car and I’m not. They are the ones that make it happen.

“Last year we didn’t have the infrastructure to take care of a TUDOR Championship program. Our planned program didn’t come to fruition, so we were left up to running the car solely as a Wright Motorsports car at Daytona. We tried Rum Bum at Sebring, which was a good situation, but due to the driver ratings and pairings it wouldn’t work for the rest of the season. For [Mazda Raceway], Martin (Snow) decided to run the car himself. Then an opportunity came when Dempsey Racing was looking to fill another spot under its awning, and it was a real good fit. Starting at Belle Isle, our No. 58 car was supported by Dempsey Racing and we provided engineering support for their No. 27 car. That’s where the whole program began.”

How long have you been involved with the Rolex 24, and what are your favorite memories from that race?

“I’ve been racing at Daytona since ’93. Last year, we were on the lead lap fighting for the win at the end, but we just didn’t have the speed of the Ferrari or the Audi. It’s taken a lot to develop the car to where it is right now, but it’s still not to where we’d like it to be in order to compete in the class.

“I was fortunate to have prepped the car that Franz Konrad won with in 1998. We had a two-car effort. I brought the car that eventually won the race and did all the prep work. I was crew chief on their sister car that came over from Germany, but that car expired after 13 hours with an engine issue. That was a bittersweet type of thing for me. The car that I was crew chief on had the issue, but the car I really looked after won without a hiccup.

“I was alongside two other winning efforts. I’ve done the race a lot, but behind the scenes. The last full Wright Motorsports program before last year was in 2009, and we finished third in class. Flying Lizard contracted us in 2012 to do a program for Daytona, and that was looking to be a strong effort until we had an accident while in contention for the lead at the six-hour point that set us back. I feel like we’ve always had a competitive product at Daytona. It’s a lot more than being fast, that’s for sure.”

How is your relationship with Patrick Dempsey, and what did you think of his performance when he finished third at VIRginia International Raceway?

“I’ve worked with a lot of drivers. Many of them have had enthusiasm and passion for the sport, but I’ve got to say that Patrick is up there at the top. You can tell is not there to be a poser. He wants to be at the top of the sport. Last year he drove like a champion at VIR. He drove that car from last place in a 19-car field to third when he pitted. Our goal for him this year is to create the environment that will take him to the next level. He’s been training a lot and putting in the effort on his side. Now, we’ve got to deliver on our side. The Rolex 24 is a special race for Patrick – as it is a special race for everybody. The world of racing – a who’s who of motorsports – will be watching that race.”

How do you feel about this season, coming off the four-race streak of good finishes last year?

“In all actuality, last year’s championship was ours to lose. The performance was there, and we never had a mistake on track that cost us a race. We did have a couple penalties that set us back. We couldn’t win by outright sheer speed, but we always tried to be on the podium. We wanted to win, but our competition was so strong, and it seemed that whatever we did to the car to gain some extra speed, they would match it.

“We did finish strong, and we’re happy about that. This year, we’re looking at a championship run. That’s what our goal is. It may not be going for all-out race wins, it’s for a championship. We’d like to get that for Madison, for sure.”

How did you get together with Madison Snow?

“When I was the crew chief for his father, Martin Snow, (his mother) Melanie used to bring him to the track. He was two, three years old at the time, and I’ve been fortunate enough to remain friends with the Snow family. When it came time for Madison to make that next leap, they chose us to support that. It’s been a ride to see him do what he’s been doing. When he gets in the car, there’s no question that the car will come back in one. He drives like a veteran, and that’s truly from the teaching from his mom and dad gave him.”