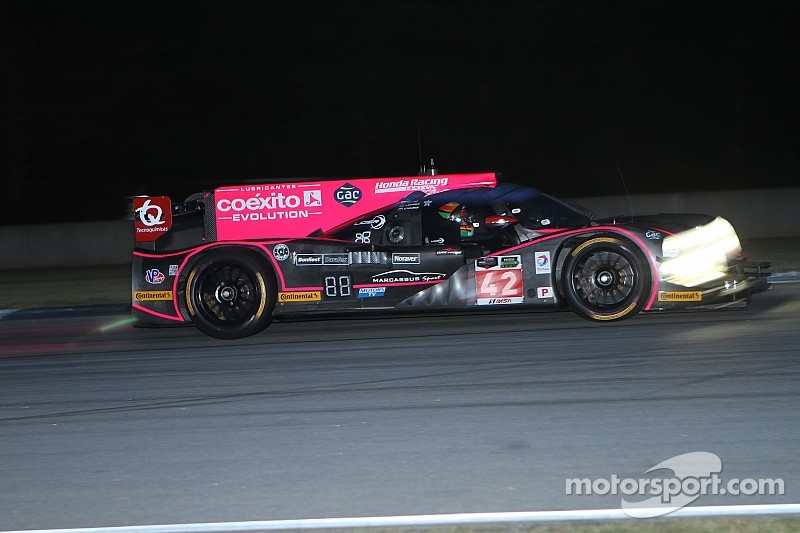 Since the 10-hour Petit Le Mans will end in darkness, Thursday night’s practice may well have been the most important of the pre-race runs. If that’s the case, the number 42 OAK P2 Liger-Honda of Gustavo Yacaman, Ho Pin Tung and Alex Brundle (in photo) will be a factor in the TUDOR SportsCar Challenge series finale at Road Atlanta Saturday.

All three drivers were quick, but Yacaman set the fast time of 1 minute, 14.923 seconds. Close behind was Richard Westbrook in the number 90 Spirit of Daytona-VisitFlorida.com Chevrolet Corvette DP, at 1:14.991. Third was Sebastien Bourdais in the number 5 Action Express Corvette DP at 1:15.056.

Bourdais, in the championship-leading entry, was uncharacteristically upbeat after the session: “The car is good. We can get the balance which ever we prefer. We are limited, but I think everybody is, especially in the top part of the track. But the car is performing well; it is reacting well to changes. Really, we can’t be our own enemies here. Patience is always a virtue, but this race is going to be more an ever. We will try and keep our nose clean, and stay out of trouble, and hopefully we will be in a position to win the thing.”

A total of 51 cars posted times. Two did not: The number 18 GTD Porsche, and the number 71 GTD Porsche, but they were not expected to run. By rule, each driver assigned to a car must turn a minimum number of laps during the session.

In the other classes, the number 08 RSR Prototype Challenge car with Jack Hawksworth was fastest; in GT Le Mans, it was the number 17 Team Falken Porsche 911 RSR driven by Bryan Sellers, and in GTD, it was the number 23 Team Seattle/Alex Job Porsche GT America of Mario Farnbacher.

The elephant in the room at Road Atlanta