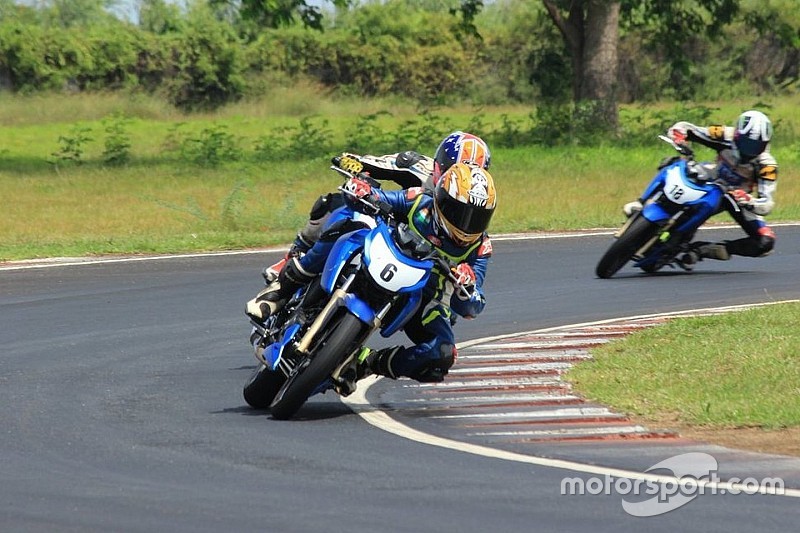 In Race 1 on Saturday, Kannan took a lights-to-flag win in the Open category, comfortably beating closest challenger Jaden Gunawardena by over three seconds.

Gunawardena meanwhile was involved in a close fight with Arvind Ganesh, with the former edging out the Chennai rider by 0.774s in the end.

Ganesh then completed the podium having made up four places after starting from eighth in the race.

Behind the top three, Rahil Peerzade fended off the pressure from John Paul to end fourth, mere 0.449s separating the two – after Paul had gained seven places from 12th.

T Ramakrishnan dropped a place to sixth, ahead of Anand Kumar, with Sofiyan Ahmed, Naveen Raj and Vikram MS completing the top 10.

The biggest losers were front row starters Vivek Pillai and Hari Prakash, while the former crashed out on Lap 4, the latter endured a difficult run to end 11th.

Yashas RL won Race 1 of the Novice category on Friday from Hari Prasath and Kamran Alam, with the same trio repeating the result in Race 2 on Saturday.

Second win in a row

The rider from Chennai was in sublime form after he took his second consecutive win at MMRT in Race 2 of the third round.

Kannan was dominant all through, winning by a margin of over 14 seconds from Pillai, who came back strongly after a crash in Race 1.

Although Pillai had a battle on his hands, he managed to edge out Ramakrishnan, who himself had Race 1 podium finisher Gunawardena at his rear all the time.

Behind the top four, Ganesh managed to hold off Raj to the line, mere 0.172s separating the two in the end.

Peerzade was seventh ahead of Prashanth Kumar as Ahmed and Paul completed the top 10, the former duo battling until the last lap with just 0.11s between the two Indians.