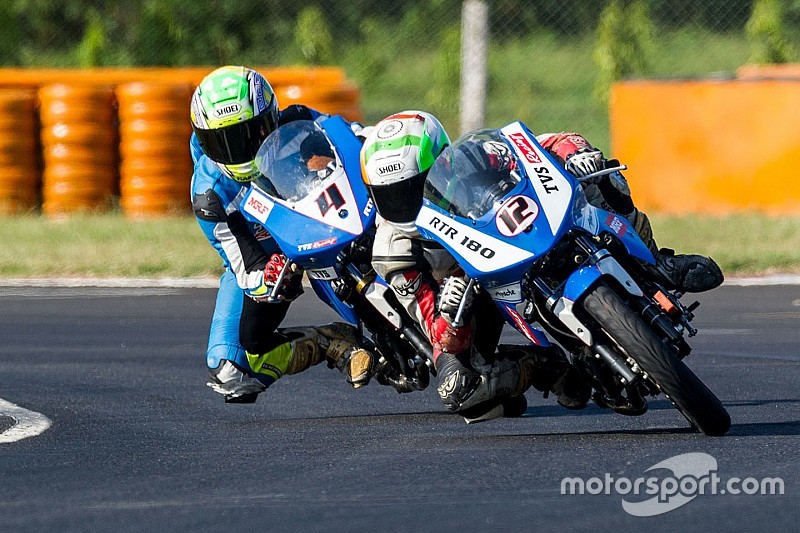 Even after missing the qualifying, it didn't deter Subramaniam from controlling both the national races in the 165cc category.

The Chennai-based rider not only got the races under his belt but headed a TVS Racing 1-2-3 with teammates Jagan Kumar and Harry Sylvester completing the podium.

While points leader Kumar took second in Race 1, it was Sylvester's chance in Race 2 to end behind Subramaniam, as the trio ran in tandem in the races.

Whereas in the second race, Mathana was comfortably able to beat Yanseen to finish fourth and salvage points for the Japanese manufacturer.

Sethu doubles up in Pro Stock

While Sethu comfortably led ahead, in Race 1 Racr's Prabhu A was able to secure second before Honda's Hari Krishnan beat him in Race 2.

Krishnan was on course for podium in the category's first race in Round 4, but a jump start penalty dropped him to sixth.

Vivek Pillai recorded podium finish with third in the first race, just missing it on in the second race ending fourth by close to half a second.

In the Super Sport 300-400cc category, Ami van Poederooijen led Rockstar Racing's 1-2-3 in both the races in the weekend.

The Spanish rider was comfortable ahead with Abhishek V and Amarnath Menon completing the podium - in the same order.