Having sealed the title in Race 1 for the fifth time in his career, Kumar went on to win his fifth race of the season in Race 2, leading a TVS 1-2-3.

Kumar finished the second race a mere 0.039s ahead of Kannan Subramaniam, with Harry Sylvester a further 0.283s away in third.

Behind the TVS trio, the lone finisher in the 165cc category was Honda Ten10's Sarath Kumar, who made his return to competitive racing this weekend.

After an impressive qualifying, the Chennai-born rider was forced to retire in Race 1, but managed to see the chequered in Race 2, adding to the useful track time ahead of his international season. 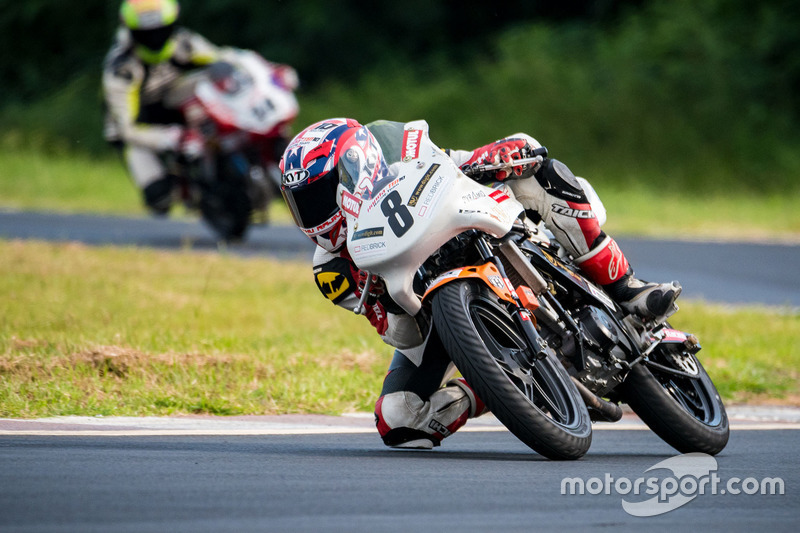 After edging closer to the championship with a win in Race 1 of the Pro Stock 165cc category, Rajiv Sethu was on-song on Sunday again.

Krishnan, who took double win in the Honda one-make races, was unable to score any points in the National championship category in the final weekend.

Racr's Dinesh Kumar completed the podium ahead of teammate Prabhu A, while Rockstar Racing's Vivek Pillai rounded off the top five.

In the 300-400cc category, Spaniard Ami van Poederooijen took one more win to add to add to his six victories in the season.

The Rockstar Racing rider was dominant over teammate Amarnath Menon, with Abhishek Vakil completing the podium ahead of Pukhraj Singh and Faraz Shariff.