Jagan Kumar and KY Ahamed made it two wins for TVS Racing as the opening round of the MRF MMSC National Motorcycle Racing Championship concluded at the Kari Motor Speedway in Coimbatore on Sunday.

Ahmed claimed the top spot in the flagship Pro-Stock 300-400cc category, beating TVS teammate Deepak Ravi Kumar by four tenths of a second. Satyanarayana Raju completed the podium spots, albeit half a minute down on the leading duo.

“I am happy with today’s win as I had to really fight for it,” said Ahmed. “Early in the race, I got caught up in the traffic and lost position, but thereafter, I got into my stride and gradually worked my way up.

“Then Jagan anna had some engine problem and I managed to get in front. I built up a good lead and eased off as I didn’t want to crash when in sight of victory,” said Ahamed.

Before the action kicked off, Raju was declared the winner of Saturday’s Race 1 after on-the-road victory Ravi Kumar and second-placed Ahmed were disqualified for failing post-race scrutineering.

Raju had originally crossed the finish line third in the race, but was promoted to the top spot after the TVS duo were penalised. 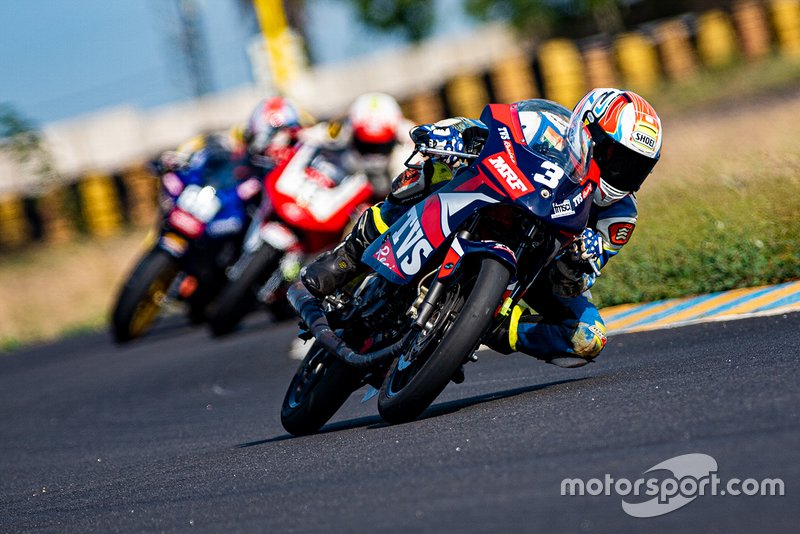 After a crash and a snapped chain ruined his chances of a win on Saturday, Jagan hit yet more troubles in the 300-400cc race, suffering engines problem while in the lead.

However, he stayed clear of trouble in the Pro-Stock 165cc category, taking a fine win in a race reduced from 12 to three laps due to a red flag.

“Yes, it is a big relief to finally win a race this weekend,” Jagan said. “Things haven’t gone my way and so, I was determined to come good. I opened up a good lead at the start and again on restart after the red flag stoppage.”

Reigning Girls champion Ann Jeniffer claimed top honours in her category, despite being the last to leave the grid after her bike got stuck in neutral gear.