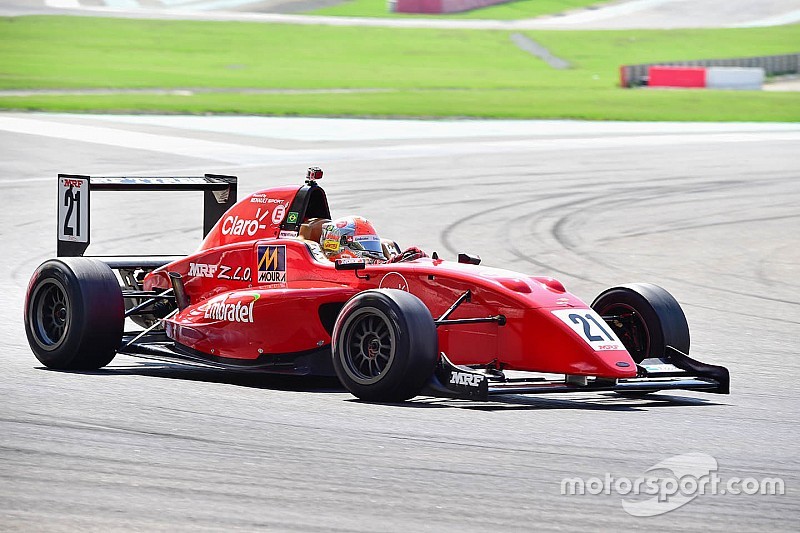 Pietro Fittipaldi completed the opening round of the MRF Challenge Formula 2000 with a commanding win at the Yas Marina circuit, as Tatiana Calderon edged out Tarun Reddy for second.

A top six reverse grid formation meant Nikita Troitskiy started on pole alongside Fittipaldi, while Reddy and Calderon were on row two.

It didn't take long for the Brazilian to take the lead as Troitskiy fell from pole behind Fittipaldi, Reddy and Calderon to be fourth at the end of the opening lap.

The Indian and the Colombian yet again had a race-long battle for second, with Calderon playing the waiting game until the last lap.

Troitskiy, meanwhile, was under tremendous pressure from GP2 racer Nobuharu Matsushita, who finally managed to get past the Russian on lap seven, Matsushita having earlier passed Jake Dennis.

But at the front, there was no stopping Fittipaldi's dominance, the grandson of double Formula 1 champion Emerson taking the win with a margin of over five seconds.

Behind, the big fight for second was won by Calderon, who took the place from Reddy through the last corner and along the main straight by a mere 0.013s, as the Indian had to settle for third.

Matsushita finished fourth ahead of Dennis, who also overtook Troitskiy. Dennis clocked the fastest lap of the race with a time of 2m12.444s.

Tatiana Calderon: “The most fun I’ve had racing for a long time!”