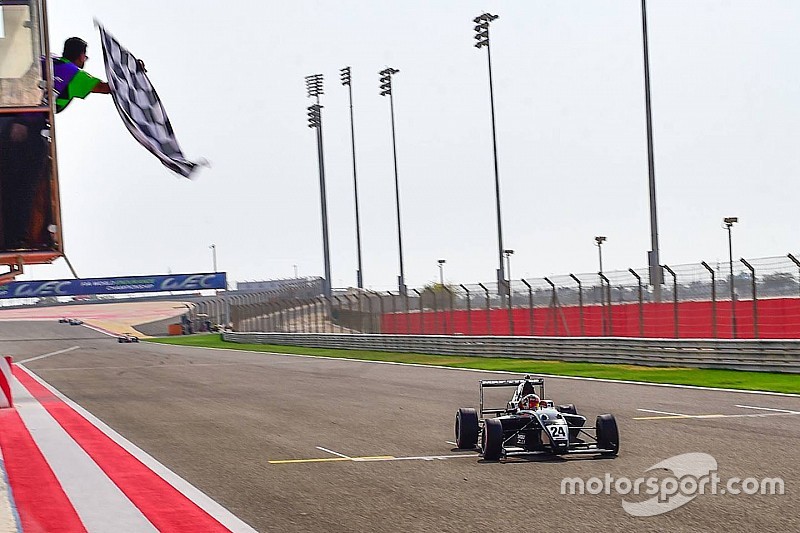 Alessio Picariello doubled up with a win in the final race of the second round of the MRF Challenge Bahrain weekend, after taking pole and a lights-to-flag victory in the first race.

Starting from sixth, Picariello got off to a storming start to move to second in the opening lap as pole-setter Sean Walkinshaw dropped behind with front row starter Matheus Leist taking the race lead.

Pietro Fittipaldi stayed third while Tatiana Calderon got a bad start and made contact with with a fast starting Tarun Reddy.

The Indian spun and slid into the gravel traps and retired from the race while the Colombian dropped to seventh.

Up ahead, Picariello took the race lead on the second lap as Leist started to struggle. Soon after the Belgian, Fittipaldi and Troitskiy too moved past the Brazilian to take second and third.

It was yet another dominant show from Picariello as he finished 5.081s ahead of Fittipaldi and also clocked the fastest lap with a time of 2m02.251s.

Harrison Newey too overtook Leist to finish fourth as the Brazilian completed the top five. Calderon eventually came home at sixth after being chased by Sam Dejonghe.

The Belgian finished seventh ahead of Walkshinshaw, the reverse grid pole sitter having had a bad second race.

The top 10 was completed by Nerses Isaakyan at ninth and Max Fewtrell at 10th who was in a close fight with 11th placed Dylan Young.

Fittipaldi leads the championship with 98 points ahead of Troitskiy with 86 points and Calderon 84 after the second round.