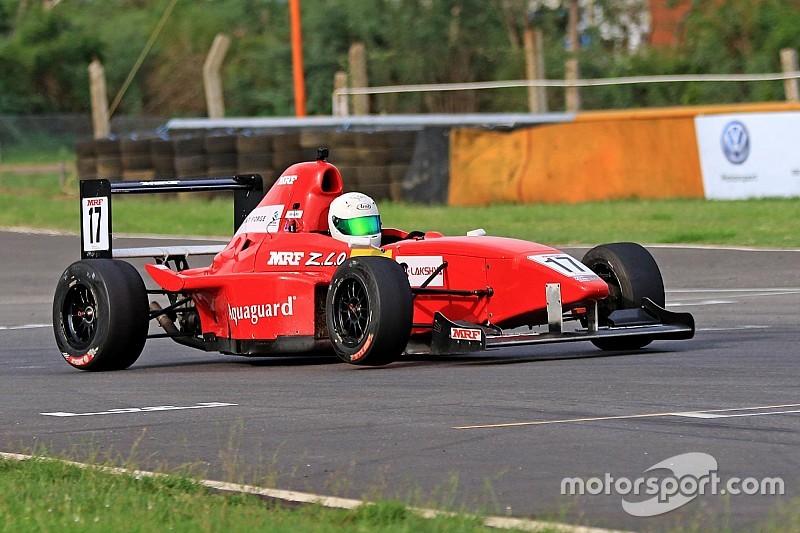 Yash Aradhya became an MRF F1600 race winner as the third round of the championship came to a conclusion at the Madras Motor Race Track on Sunday.

Aradhya started third on the grid but made a better getaway than Sandeep Kumar and managed to reel him into turn 1, before also demoting polesitter Goutham Parekh.

Parekh closed back on Aradhya’s tail on lap five and attempted to pass him into turn 9 on the next two tours, but the Bengaluru-based driver managed to fend him off at each occasion

When Parekh tried to pass Aradhya for the second time, he suffered a brief slide and fell into the clutches of Raghul Rangasamy, who had started sixth but steadily navigated his way up the pack.

Parekh managed to hold off Rangasamy and the two drivers subsequently closed in on Aradhya on the final lap, although the neither of the two were in a position to attempt a last gasp lunge.

Aradhya eventually won by 0.373s from Parekh, with Rangasamy finishing another three tenths adrift in third.

Sandeep Kumar fell out of the lead battle and wound up fourth, ahead of Nabil Hussain and Nayan Chatterjee.

Ashwin Datta’s performance slide continued as he could only muster seventh, losing further ground to Rangasamy and others in the championship fight.

Keith Dezoua finished seventh while Nirmal Umashankar, who had an off, and Keith Desouza completed the top 10.