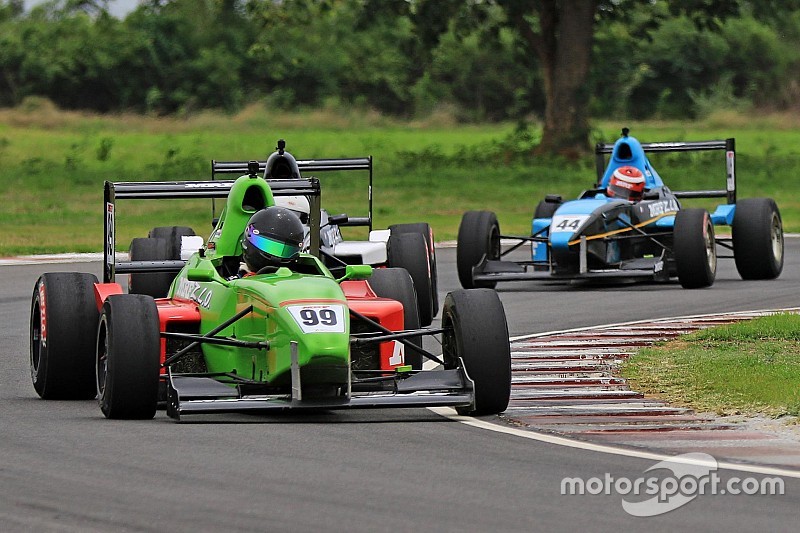 Raghul Rangasamy led from start to finish to secure victory in the final MRF 1600 race of Round 2 in Chennai.

In stark contrast to this morning’s race where half the field was wiped out by crashes, Race 3 was largely straightforward with no accidents of note.

Rangasamy started from pole and resisted Goutham Parekh’s advances into turn 1, before building a small, but significant lead over the rest of the field.

He slowly but steadily started increasing his advantage up front to claim a comfortable win by a margin of 1.974s.

While Race 2 winner Parekh couldn’t challenge for victory, he finished well clear of the rest of the field in second.

Ashwin Datta, who swept the opening round in Coimbatore but struggled comparatively in Chennai, claimed the final spot on the podium after resisting Sandeep Kumar in the latter stages of the race.

Nirmal Uma Shankar finished fifth while both Yash Aradhya and Nabil Hussain passed Keith Desouza in one corner to end up sixth and seventh respectively.

Chetan Korada was ninth, while former Volkswagen Ameo Cup champion Karminder Singh completed the top 10. Arya Singh was last of the classified finishers in 11th, while Nayan Chatterjee was the only retiree from the race.