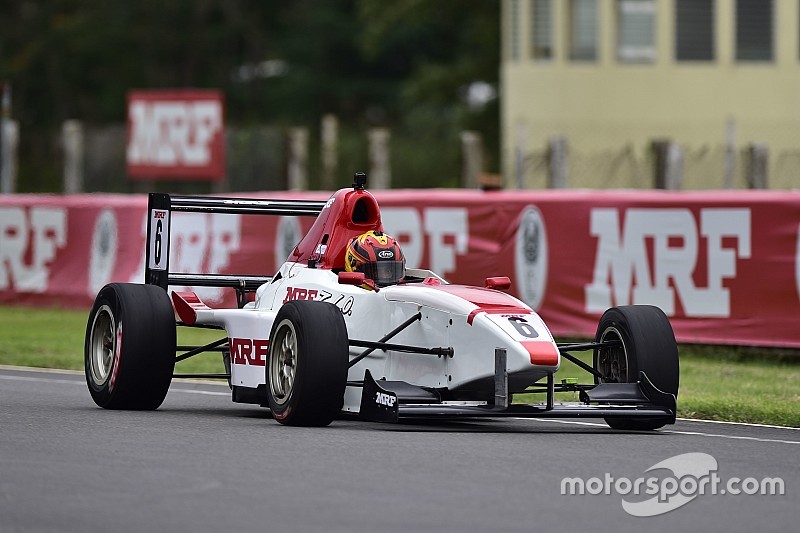 Sandeep Kumar got first blood as the second round of MRF F1600 championship got underway at Chennai’s Madras Motor Race Track on Saturday.

Polesitter Kumar made a slower getaway than fellow front row starter Nirmal Uma Shankar and slipped to second place heading into turn 1, but ran close behind him through the early sequence of corners.

That allowed him to dive down the inside of Uma Shankar at the end of the back straight and retake before the end of lap 1.

Uma Shankar stayed within a second of Kumar for the following six laps until he was handed a drive through penalty for a jump start. He subsequently ran wide at turn 1, falling completely out of contention and leaving the fight open for second place.

Keith Desouza tried to make a move over Goutham Parekh for that very spot, but lost momentum and instead dropped behind Raghul Rangasamy.

Rangasamy, now in third position, made a brave move around the outside of Parekh on lap 6. Although he was forced to run wide onto the grass, he kept his foot on the throttle and gained the inside line at the next corner to seize second position.

Their battle allowed Kumar to run away with the lead of the race, the Chennai native grabbing the win by a healthy margin of 2.679 seconds.

Rangasamy and Parekh finished second and third respectively, while Nayan Chatterjee managed to pass Desouza on the penultimate lap to secure fourth.

Bangalore’s Yash Aradhya was next up in sixth, while Round 1 triple winner Ashwin Datta was unable to make much progress from his lowly grid spot and ended up seventh.

Nabil Hussain and Arya Singh were classified eighth and ninth respectively, while the aforementioned Chetan Korada completed the top 10.

The aforementioned Uma Shankar didn't obey his drive through penalty and was consequently 30 seconds were added to his race time, pushing him down to 12th and last in the classifications.