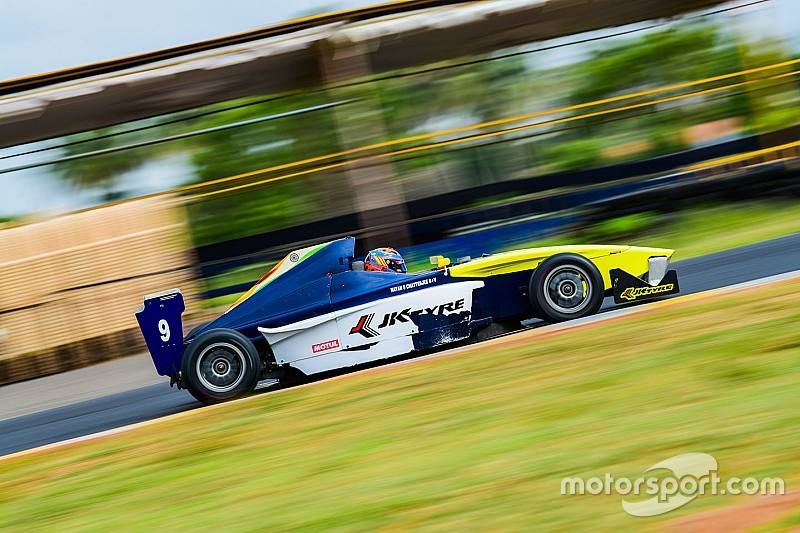 Nayan Chatterjee claimed a lights-to-flag victory in the Euro JK category as the second round of the JK Tyre National Racing Championship began in Coimbatore on Saturday.

Chatterjee qualified on pole position and was able to resist an early charge from Karthik Tharani to lead into turn 1.

Tharani made another fruitless attempt at passing Chatterjee on lap 2, before selling a dummy at turn 1 the following tour.

After appearing to make a pass around the outside, he sharply turned in to take the inside line, but in the process he lost momentum and fell into the clutches of third-placed Bryan Perera.

That gave the breathing space to Chatterjee, who was then able to pull away from the rest of the field and march to a dominant 4.831s  win.

Tharani managed to fend off Perera and eventually finished 3.5s ahead of the Sri Lankan, who completed the podium spots in third.

Ashwin Datta, who led the championship after the season opener, qualified a lowly seventh but was able to make his way up the pack to finish fourth.

Manav Sharma was next up in sixth, while Nirmal Uma Shankar fended off Arya Singh and female racer Mira Erda to take seventh.

Chetan Korada was last of the classified finishers in 10th after stalling at the start of the race. He had qualified on the front row.

Yash Aradhya was the only retiree from the race, the former National Karting Championship pulling over at the edge of the track on the penultimate lap.