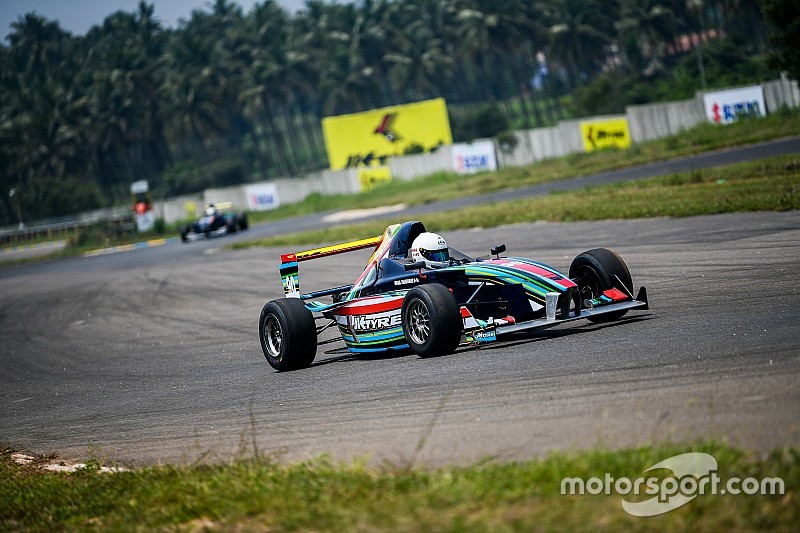 Nirmal Uma Shankar notched up his first win of 2018 as the third round of JK Tyre National Racing Championship concluded at the Kari Motor Speedway on Sunday.

It was pole-sitter Yash Aradhya who led the field at the start of Race 4, with Uma Shankar diving down the inside of Bryan Perera to move into second.

The status quo at the front-row was maintained until around lap 10, when Uma Shankar and Perera suddenly closed in on race leader Aradhya.

Uma Shankar got a better exit than Aradhya at the final corner and was ahead of the Bangalore-based driver halfway through the start/finish straight.

Uma Shankar then checked out at front, while Aradhya fell into the clutches of Perera, who in turn came under pressure from the battling trio of Ashwin Datta, Nayan Chatterjee and Karthik Tharani.

Perera managed to pass Aradhya into turn 2 on the last lap to finish second, as Uma Shankar romped to a convincing 3.196s victory.

Datta managed to hold fourth in a race-long battle with Chatterjee and Tharani to extend his lead further in the standings.

Arya Singh was next up in seventh, finishing just a second clear of female racer Mira Erda. Chetan Korada was classified ninth while Manav Sharma completed the top 1.

Sudarshan Rao Karwal was the only retiree from the race.