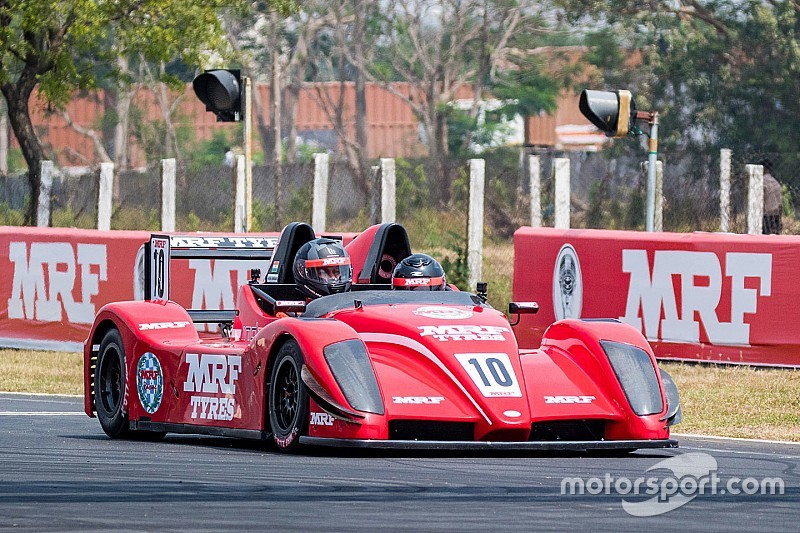 The 40-year-old in a red coloured MRF race overalls drove the purpose-built JA Motorsport car for about 15 laps to give three of his close associates a drive around the circuit.

"The experience here [at MMRT] was fabulous. The last time I was here it was for a BMW promotional event. This time it was with MRF and formula cars," he said before leaving.

"I have always been a car enthusiast. So the first hand experience to drive a formula car on this track was incredible. I thoroughly enjoyed [it].

"With time my timing also kept getting better and better. I was used to driving with MRF [cricket bat] on the field, but not on the race track.

"Both types of driving with MRF makes it interesting and exciting," the Maestro added.

With the cars supposed to be clocking times close to 1m39's, Tendulkar lapped the 3.717 km circuit in the late 1m50's - a decent time for a non-racer and with a passenger in the car.

Before his outing in the #10 red Inde 2.0 machinery, Tendulkar waved the green flag to start the third race of the Indian international MRF Challenge series.

The Mumbaikar had famously waved the chequered flag during the inaugural Indian Grand Prix in 2011 at the Buddh International Circuit.

Urges to not put pressure on Schumacher Jr

In his brief visit, the Master Blaster spoke with Mick Schumacher, son of seven-time Formula 1 champion, Michael, who had met the cricketer multiple times in his career.

"I had heard about him [Mick] through his father and our children [Arjun Tendulkar, son of Sachin] are of the same age.

"I have seen his family photos and the way he spoke about his family since those days.

"It’s always nice to have youngsters who want to go out and compete hard and play any sport to the best of their abilities.

"Mick is without doubt one of them. But I would say that he should not be constantly pressurised like this and should be left alone to enjoy his driving," he added.

Later in the day, Tendulkar was at the prize-gala ceremony to give away the awards to champion Harrison Newey, first runners-up Joey Mawson and second runners-up Schumacher.

The Indian cricket legend spoke about his love for F1 and explained how having passion for the particular sport, is crucial for any sportsperson to succeed in life.