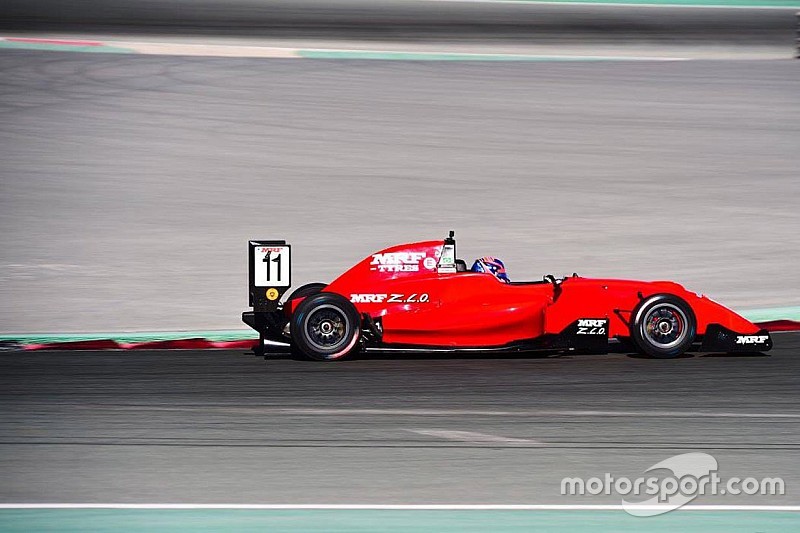 Felipe Drugovich built up a sizeable lead in the 2017/18 MRF Challenge standings after winning the penultimate Dubai race on Saturday.

Unlike the first race of the weekend, Presley Martono got away cleanly from pole position and held the lead on the first lap.

However, Drugovich, who started alongside on the front row, hung on to Martono’s tail and passed the Indonesian on lap 2 to emerge as the new race leader.

Although Martono never let Drugovich run away with the race and stayed within a second during the remaining eight laps, he could never put up a challenge to prevent the Brazilian from claiming his fourth win of the season.

Alex Karkosik passed Harri Jones on lap 7 to take the final spot on the podium, while the latter dropped down the order and eventually finished eighth.

Danial Frost finished fourth after a late move over Julien Falchero, while Robert Megennis and Michelangelo Amendola were classified sixth and seventh respectively.

After the aforementioned Harri Jones, Manuel Maldonado and Nazim Azman completed the top 10.

Rinus Van Kalmthout’s championships hopes took a big blow after he tumbled from third to 18th on the third lap of the race.

He recovered enough to finish 12th, but his second pointless result of the season puts him someway behind Drugovich in the championship standings.