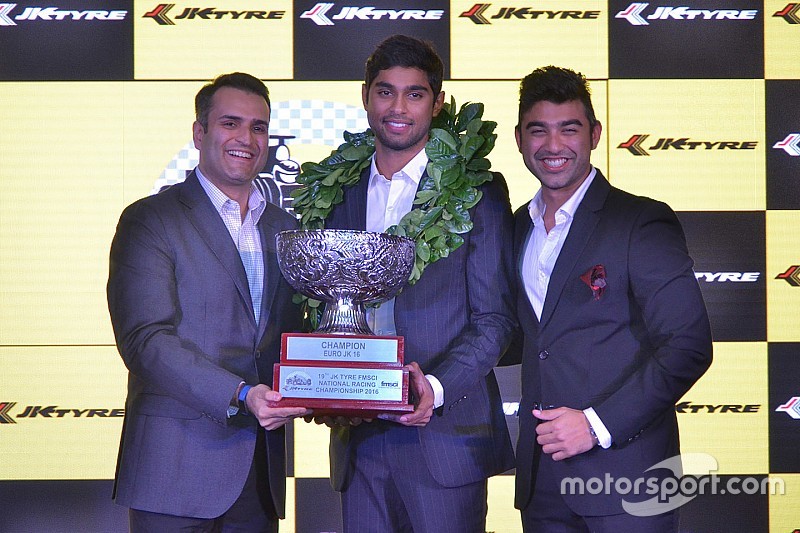 At one stage, the Euro JK title was heading towards Mumbai’s Nayan Chatterjee. However, as Rachit Thukral explains, a quick turn of events changed the outcome of the championship.

Chatterjee arrived in 2016 in far better shape than he had been at any point in his brief racing career.

The effort the Mumbaikar had made to improve his fitness was evident from the very first round in Coimbatore, as he took a double win in Races 3 and 4.

Given that he retired from the opening race of the weekend - which compromised his grid position for Race 2 - it was a remarkable recovery from the 19-year-old.

Chatterjee’s strong form continued in the second round, also in Coimbatore, as he added two more wins to his tally. With podium finishes in the other two races, Chatterjee had built a comfortable lead in the championship.

A change of fortunes

However, all was set to change in the penultimate round of the season. Chatterjee suffered from a string of technical gremlins and misfortune, including a bizarre incident where he was rear-ended under the safety car.

With no podiums finishes and 15 points in all, Chatterjee slipped from first to third in the standings in a matter of four races.

And as we’ve so often in racing, there was one driver to pick up the pieces. In this case it was Anindith Reddy.

The Hyderabad-based driver won three races during that weekend, catapulting himself to the top of the championship.

“The main reason [behind the turnaround] was that the car started working really good from Round 3 and since [then] I was able to focus on going quicker,’’ Reddy told Motorsport.com.

“As soon as I realised the changes on the car worked in the first race in Round 3, it gave me the confidence to keep going [even more]. And that’s what helped me [go further]."

Reddy later dismissed any claims that his triple was down to fortune by dominating proceedings in the final weekend at Buddh, taking four out of four wins.

Whether it was leading the field from pole, or charging through from a lower grid spot, Reddy was just as good as anyone could possibly be.

The 26-year-old, hence, clinched the title with one race to spare, adding to his Vento Cup triumph from 2015.

The feat was made all the impressive from the fact that 2016 was his first year of single-seater racing. But one has to consider that he accumulated more mileage than anyone else on the grid, having also done a full season in F1600 in the run up to his Euro JK campaign.

While Ananth Shanmugam never led the standings at any stage of the season, he was always there in the title fight through his consistent results.

“The season was excellent from a driving point of view as I was consistently the fastest from round two," said Shanmugam to Motorsport.com.

"My racecraft was something I can be happy about as well. I was able to get to the limit faster and also consistently lap at a record pace."

He successfully edged out early points leader Chatterjee, who endured a mixed final weekend in Delhi.

“In Round 3, I had issues with the gearbox," he told Motorsport.com. "Then I had more bad luck in Round 4 where I had a puncture, and after that I just couldn’t drive it [properly].

“Without those issues, I would have definitely won the title. But this sport is not only about talent and skill. It’s also about luck.”

Several guest drivers with experience of racing in Europe took part in the championship, with Kush Maini and Krishnaraaj Mahadik winning one race apiece.

2015 National Racing Champion Karthik Tharani was also present for half the races, scoring one win in the penultimate round of the season.

Elsewhere, Dhruv Mohite was always there or thereabouts, but could only manage a single podium finish.

Paddle shifts were introduced to bring the car in line with other junior single-seater championships around the world, while changes to wings and tyres brought aerodynamic and mechanical gains.

Coupled with a tune-up of the BMW engine that now churned out 160bhp, the upgraded Euro JK cars were seven seconds faster than their predecessors at the Buddh International Circuit.

*Not eligible for points