Tatiana Calderon: “It was exciting to have Montoya helping me!” 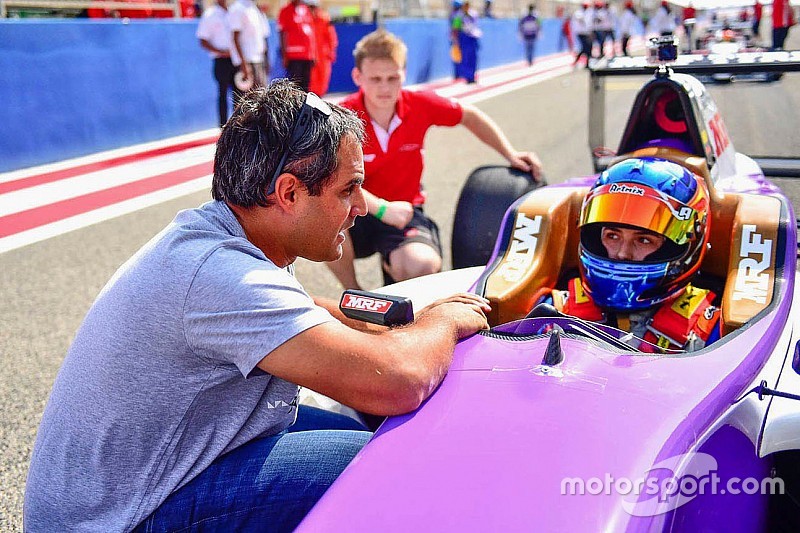 In her latest Motorsport.com column, Tatiana Calderon looks back on a memorable weekend in the MRF Challenge series in Bahrain, where she was joined by her idol Juan Pablo Montoya.

Welcome to another of my Motorsport.com columns! It may be the off-season for most drivers, but I’m set to have a pretty busy winter fighting for the MRF Challenge Formula 2000 crown – after the first round in Abu Dhabi went so well, I decided to sign up to do the rest of the series, starting in Bahrain last weekend.

It was great to get back on the podium for a fourth time in a row, but that wasn’t the highlight of my weekend, because before the racing began I had the opportunity to get some advice from my childhood hero Juan Pablo Montoya, who inspired me to take up go-karting when I was just nine years old.

He was there because of his WEC test with Porsche, and I was fortunate enough to have the chance to do the track walk with him. He was really helpful, giving me tips before the races, so I learned loads having him there – it was so exciting to have my idol helping me!

Juan Pablo’s advice was especially useful, as the track time was very limited because of the busy schedule. There was only 25 minutes for practice, and I had to come into the pits when my engine cover started coming loose. I still managed 12 laps, which was enough to get a feel for the track.

We didn’t do many set-up changes for qualifying as we weren’t sure how the track would evolve. During the 30 minutes, I was improving a bit every lap and my last lap was only 0.08s off pole – but I missed a gearshift that lap, which cost me two tenths.

It was pretty frustrating to think I would have been pole without that mistake; instead I was only P4, but I wasn’t too unhappy given how close it was.

For the first race we made a few changes, because I had a bit of understeer in qualifying, but we went a little bit too aggressive so I was suffering from oversteer. I made a really good start and moved up to P2, but once Nikita Troitskiy got back past me, he was a bit quicker and I couldn’t really do anything.

I spent the rest of the race defending from Pietro Fittipaldi, and P3 ahead of him was still a pretty good result for the championship, and it’s always nice to get on the podium!

That result meant I was P4 on the grid for race two – I made another good start and we were four wide heading into Turn 1. I’m not sure who was to my outside, but whoever it was jumped over the kerbs and cut it front of me, forcing me to slam on the brakes and allowing a few drivers to pass me.

Then I was on the inside of Tarun Reddy for Turn 2, but he just turned into me and we made contact, which damaged my steering a bit. The race became a damage limitation exercise from that point, and while I was able to continue and move up from P8 to P6, I wasn’t quick enough to catch the cars ahead.

Still, I salvaged some good points, which was important for the championship, and there are still eight races to go and plenty of chances to catch up with Pietro, who is 14 points ahead now.

Next up on the MRF Challenge calendar is Dubai, another track I don’t know at all, so I need to do some simulator work to get acquainted with it. But I surprised myself at how quickly I got to learn the track at Bahrain with not much practice time, which will be helpful for the future.

Speaking of the future, I’m excited to reveal I will be taking part in the post-season GP3 test at Abu Dhabi next week, which will be important for deciding what series I’ll be racing in next year. Hopefully I will have more news on that to bring you all soon!