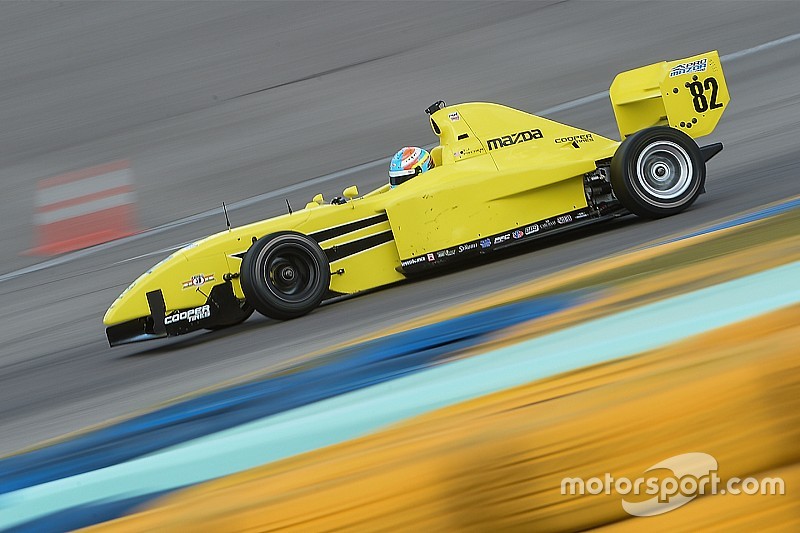 Fischer and new Pelfrey teammate Nikita Lastochkin, whose ride was only confirmed this morning, ended the day just 0.03sec apart on the timesheets, with their teammate Carlos Cunha only 0.15sec further back.

Said Fischer: “We were constantly working at it today, pushing the whole time because everyone is going to be quick in this field. We worked a lot on brake zones and making sure everything is there, rather than being quick on one part of the track but losing time somewhere else.

"We did qualifying runs and race runs so we had the whole spectrum. There’s still a ton for me to learn – how to manage the car, how to manage the tires. It’s night and day compared to last year. Being in just one series this year is good: I can build a foundation and use this as a springboard."

Lastochkin commented: "I was a little concerned going into today because I’d never even sat in the car before. To be able to do some good times gives me a lot of confidence.

"The morning was great but I got a little tired by the end of the day because the car is a lot more physical than the USF2000 car. It has more downforce and more grip and it’s more lively to drive. To be honest, I’m a bit overwhelmed after the first day, but I couldn’t be happier to be back at Team Pelfrey."

The new Tatuus USF-17 Mazda has seen a welcome burst of speed for the series, with the fastest USF2000 car today setting a time that would have been third on the Pro Mazda timesheets, as the latter series awaits the arrival of its new Tatuus PM-18 Mazda in 2018.

Said Askew: "I came here with a question mark over how we stack up against the rest, so I’m really happy. We’ve tested four or five times and the car has been fantastic: this just solidifies that. We’ve worked on qualifying runs, because the balance changes so much depending on the tires, and we’ve worked on the car in traffic. We’re making changes every session, so we’ll keep working on that tomorrow.”

VeeKay added: “It was a very good day, being in the top three in every session. I think if we can put everything together tomorrow we can be ready to earn pole positions this season. It’s been good learning the new car; after a couple of tests, I knew where the car was going. We’ve been working on balance in the corners and in the mid points.”

Series returnee Robert Megennis was third for Team Pelfrey which, like NWR, had two cars in the top six and three in the Top 10. Parker Thompson, last year’s series runner-up in the title race, led new USF2000 squad Exclusive Autosport into the top 10 with P7, half a second off top spot.