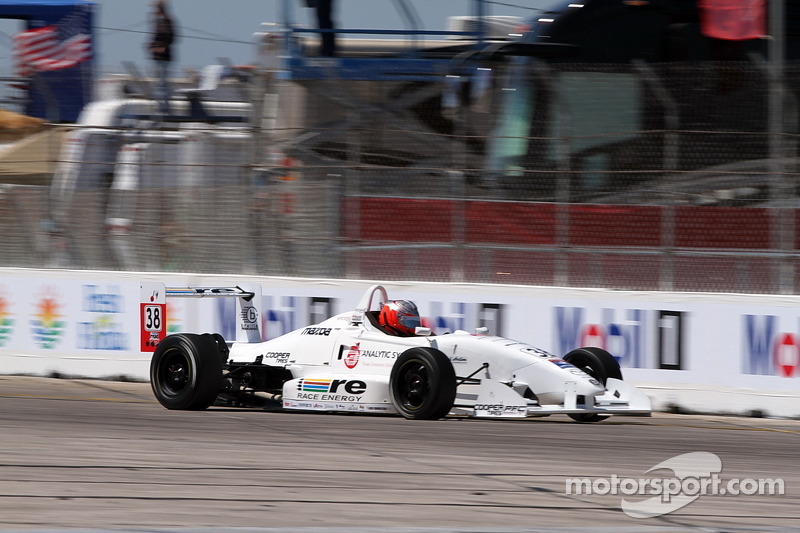 How tough were the conditions at the first Pro Mazda race at the Shell Pennzoil Grand Prix of Houston? Third-place Dalton Kellett, who led part of the race, crashed – after the checkered flag, all by himself.

In the end, Scott Hargrove (in photo, from a previous event) triumphed. "it was the most hectic race I've ever been in," he said. "There were a few times I thought I was done."

Hargrove started out near the front, but early on collided with Cape Motorsports teammate Neil Alberico, sending Alberico into the wall, which sent Hargrove to the pits for a stop-and-go penalty.

Rain began falling moments after the race took the green flag, but it looked like it would pass. But it didn’t, requiring all the top cars to make a pit stop for rain tires. Spencer Pigot was leading, and declined to pit under a caution flag, instead diving into the pits as the race resumed, dropping him from the top spot to 14th. He worked his way up to eighth, but lost his shot at a victory.

Team Pelfrey drivers Nicholas Costa and Kellett both led, but it was Canadian driver Hargrove, who pit for rain tires separate from his penalty, who charged back through the field to the lead. He was passed briefly by Kellett, but regained the lead and never lost it. He has experience on a wet Houston track, he said, which taught him he could handle Turn 5 wide-open, which left the competition in the dust.