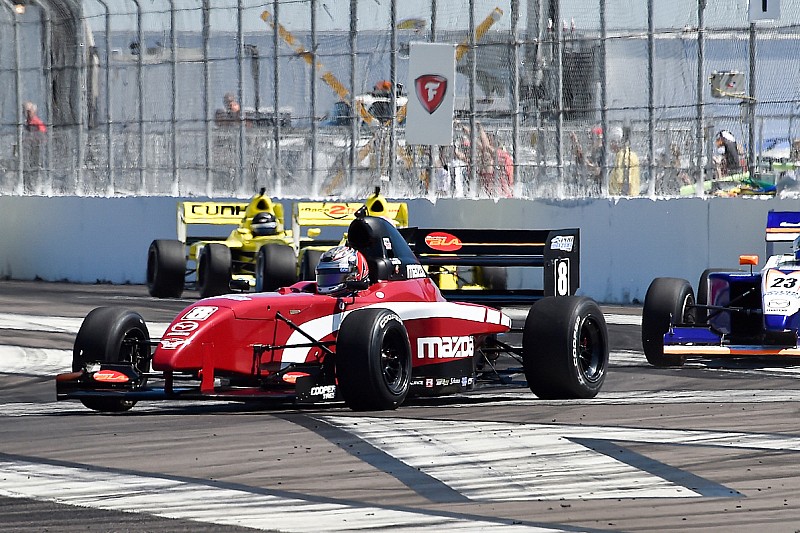 Martin took the lead at the start ahead of Franzoni chased by the three Team Pelfrey cars of Carlos Cunha, TJ Fischer, and Nikita Lastochkin.

Behind them, Sting Ray Robb led the trio of World Speed Motorsports cars in sixth, seventh and eighth until Max Hanratty of ArmsUp Motorsports got past Bobby Eberle on Lap 4 and started trying to close down the six second gap to Phillippe Denes in seventh.

On Lap 13, Robb split the Pelfrey cars, passing Lastochkin for fifth as Cunha raised the pressure on Franzoni by turning fastest lap. At the end of Lap 16, Franzoni drifted from the apex of the hairpin, and that allowed Cunha to get firmly in his slipstream. The Juncos car held the inside line all the way down the front straight as a form of defense, but Cunha had enough momentum to drive around the outside and take second.

However, just a lap later, the #81 Pelfrey car expired and Martin was left sitting pretty with a 2sec lead over Franzoni, who now had a 2.4sec lead over Fischer.

The race order was compressed on lap 23 when a full-course caution was thrown for a crashed National Class car, that of Kevin Davis, but on the restart four laps later, with just four minutes left on the clock, Martin stayed comfortably ahead of Franzoni who defended perfectly from a rejuvenated Fischer.

Robb would finish fourth, while Denes and Max Hanratty got past Lastochkin, but following a moment with a backmarker, Denes was sidelined briefly, allowing Lastochkin back into fifth ahead of Hanratty. Denes came home seventh and Eberle took eighth.