Rinus VeeKay dominated the Pro Mazda races for Juncos Racing, Kyle Kirkwood did the same for Cape Motorsports in USF2000, their prime virtues not only raceday pace but also the ability to dodge the carnage… 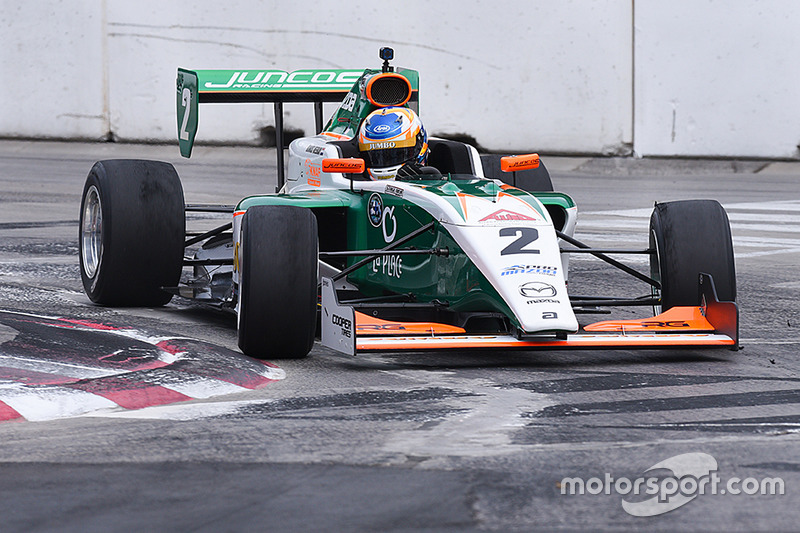 Photo by: Mazda Road To Indy

VeeKay of Juncos Racing won a torrid Race 1, leading from pole position to checkered flag, but everything else about the race was unexpected.

At Turn 1, Lap 1, BN Racing’s David Malukas ran wide on corner entry allowing Canadian Parker Thompson into second, but down the long straight toward Turn 3 all hell broke loose. Antonio Serravalle in the other Exclusive car squeezed the challenging RP Motorsports car of Harrison Scott into the inside wall, and this appeared to break Scott’s suspension, so it ‘sat down at the rear’ and then launched high into the air as it struck the Pelfrey cars of Sting Ray Robb and Andres Gutierrez which collided with Robert Megennis in the second Juncos machine.

Scott’s car landed upside down in the run-off area, IndyCar’s AMR Safety Team were very swiftly on the scene and remarkably Scott was eventually cleared to race on the Sunday.

After a lengthy clean-up under caution, VeeKay dashed into the lead once more, but the following lap Malukas tried too hard to separate Thompson from second place, and drove both cars into the wall and out of the race.

Thus another Juncos driver, Carlos Cunha, who’d snagged the wall in qualifying and thus started only 11th, suddenly found himself in second. He had nothing for VeeKay, but once he’d held off Oliver Askew’s Cape Motorsports car, he didn’t look like losing his runner-up spot.

In fact it was Askew who lost momentum in this podium battle and fell behind his teammate Nikita Lastochkin. As the pair of them tripped over each other, Raul Guzman in the second RP machine caught up with them and stole third place, leaving Askew to come home fourth ahead of Lastochkin.

VeeKay, Malukas, Megennis, Scott, Robb, Askew, Gutierrez, Cunha was how the top eight lined up in the 14-car field, RP Motorsport having done a remarkable job to rebuild the flying Scott’s car overnight. Sadly, the crew saw their car go straight down the escape road at Turn 1, and he never rejoined.

VeeKay grabbed the lead ahead of Megennis, Malukas, Askew, Cunha and Robb, but on Lap 3 Robb had just moved up to fourth ahead of Askew, when Guzman in the second RP car struck the wall exiting Turn 11 onto the pit straight. The resulting shunt snapped the car in half and collected Gutierrez’s Pelfrey machine.

Inevitably it was a lengthy clean-up, and it became a timed race. VeeKay broke away but Malukas was all over the tail of Megennis but couldn’t make it happen, but Askew repassed Robb for fourth, Cunha was sixth and Thompson – who’d started 14th – was up to seventh.

The positions second through sixth ran nose-to-tail briefly, as Megennis lost pace and bottled them up. That gave Askew a chance to get around Malukas, while Robb got muscled aside and fell to eighth, passed by Lastochkin. That became seventh when Thompson pitted, with possible damage.

Askew dived down the inside of Megennis at Turn 3 on Lap 19 and immediately pulled away, but he was already at a 6.5sec deficit to leader VeeKay. Megennis was left to hold off Malukas, Cunha and Lastochkin. All was civilized until Lap 27, until Cunha got a run on Malukas down to Turn 3, then tried to go around the outside of teammate Megennis for third and slid into the tire wall as he reapplied the throttle on exit. Meanwhile, behind the two Juncos cars, Malukas went into the Turn 3 run-off with car damage. Out came the full-course caution, wiping out VeeKay’s five second lead over Askew.

There was time only for two laps by the time the field got the green again, and though Askew pushed hard, he had nothing for VeeKay who won by half a second, with Megennis holding off Lastochkin. Thompson came home eighth, having lost 34 points to VeeKay over the course of the weekend. 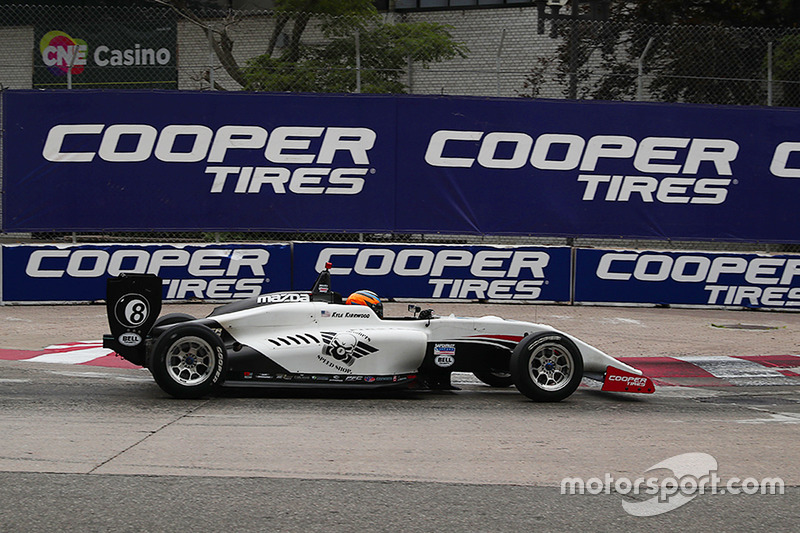 Photo by: Mazda Road To Indy

Cape Motorsports’ Kyle Kirkwood started only third for Race 1 because he lost his fastest lap in qualifying as a result of not slowing enough for a yellow flag. Yet by the time he exited Turn 1 on the opening lap, he had wrested the lead from polesitter Dakota Dickerson of ArmsUp Motorsport.

Dickerson then kept him under pressure throughout, but Kirkwood made no major errors and clocked his fifth consecutive win, so that he now leads the championship by 114 points.

Kaylen Frederick got around Pabst Racing teammate Rasmus Lindh soon after a restart following a caution, which had been caused by Jose Sierra (DEForce Racing) and Darren Keane (Newman Wachs Racing) colliding while disputing fifth.

Keith Donegan (BN Racin) and Calvin Ming (Pabst) were fifth and sixth ahead of Igor Fraga who earned the Tilton Hard Charger Award after climbing from 17th on the grid in his Exclusive Autosport machine.

A huge but slow pile-up at Turn 3 on the opening lap of Race 2 involved the first four starters – Frederick, Donegan, Lindh, Dickerson – and several backmarkers, and so fifth-starting Kirkwood ended the first lap under caution but in the lead, followed by the Exclusive cars of Fraga and Danial Frost and the Pelfrey cars of Bruna Tomaselli and Kyle Dupell.

Fraga dived for the lead past Kirkwood on the restart and completed the pass but the championship dominator wouldn’t let him go as the pair of them left Frost behind. Meanwhile Frederick and Lindh, thanks to some aggressive driving and so many people being involved in the original shunt, were up to fourth and fifth within a mere four laps of the restart, and on Lap 12 they swapped places and Lindh closed in on Frost. Into Turn 1 on Lap 15, the Swedish rookie grabbed the last podium spot. Into Turn 3 on Lap 16, Frederick lost control on the dirty inside line as he tried to pass Frost, and skated straight on down the escape road. He’d rejoin in 12th.

Up front, the frantic fight for the lead had resolved itself, Fraga having to give way to Kirkwood at Turn 8, and the Cape Motorsports driver pulled away to his seventh victory of the season. However, Fraga had to keep piling on the speed to keep clear of Lindh who eventually ran out of pace and time and settled for third.

Frost was a distant fourth ahead of the Team Pelfrey car of Julian van der Watt, Dickerson and Jose Sierra of DEForce Racing. Frederick recovered to take eighth.

Ilott says Portland experience will pay off at Laguna Seca

Ilott “in discussions” over IndyCar switch in 2022

Ilott says IndyCar is a “central option” for the future