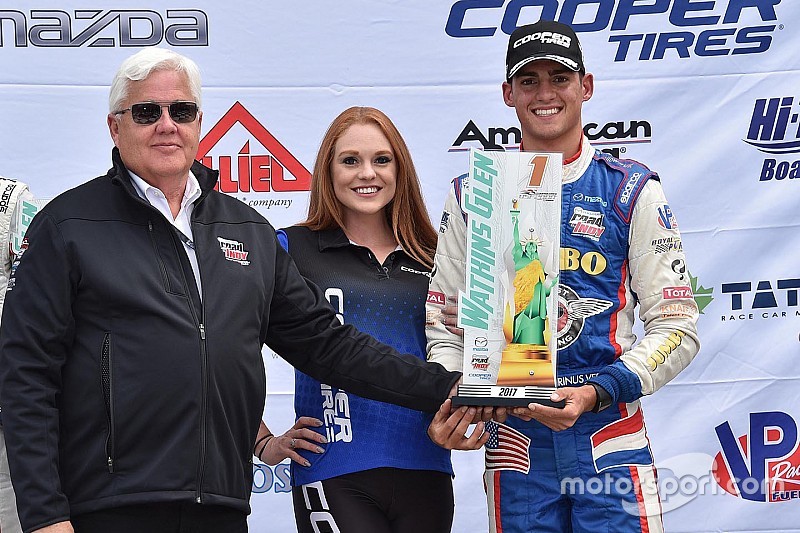 Dutch youngster Rinus VeeKay, who took second in USF2000 this year, has been announced to move up to Pro Mazda with frontrunner team Juncos Racing for 2018.

VeeKay spent his first full-time season in cars this year with USF2000 as his main campaign.

The 17-year-old, who is mentored by two-time Indy 500 champion Arie Luyendyk, had a season-long title fight with Oliver Askew.

While he ended up missing the crown by seven points, he still enjoyed a season of three wins and 12 podiums in 14 races.

While he tested in Indy Lights with Belardi in the two-day post-season test at Indianapolis Motor Speedway, VeeKay will move to Pro Mazda with Juncos, the team 2017 champion Victor Franzoni raced with.

"I feel very honored that I can join such a successful team," said VeeKay.

"They have a very professional attitude and the cooperation during the test was excellent from the very first moment; I really felt at home.

"I was also able to visit the team’s workshop in Indianapolis where they have state-of-the-art facilities, and everything looks tidy and clean like a Formula 1 operation which impressed me."

Team principal Ricardo Juncos added: "I am thrilled to announce Rinus is joining Juncos Racing for the 2018 Pro Mazda season."

"We first worked with Rinus back in October testing at Mid-Ohio and were very pleased with him all around.

"He was very fast on track, and had a great professional approach when working with the crew and engineers.

"Rinus showed he will be a top contender on track and he is going to be an incredible asset to our Pro Mazda lineup this coming year.

"I want to thank Rinus and his family for the opportunity to add him to our program and look forward to a great year as we compete for another championship."

Over the winter, Veekay is also racing in MRF, where he grabbed a victory in the season opener in Bahrain.