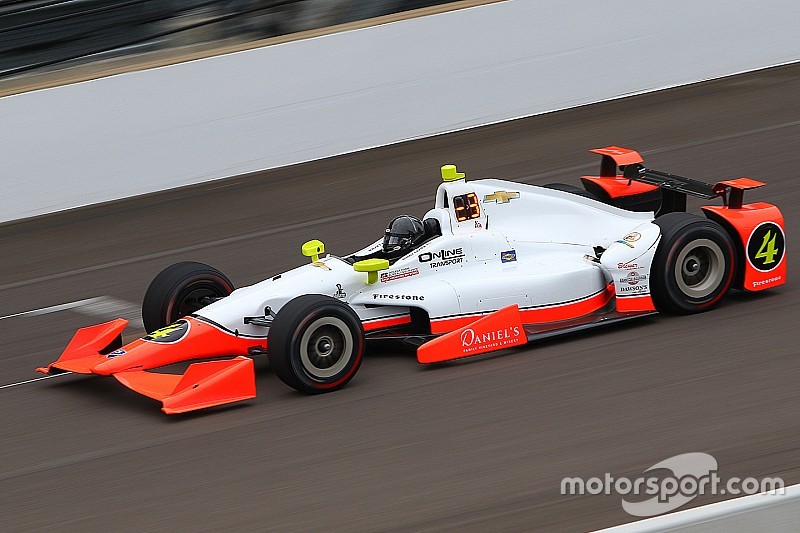 Buddy Lazier may be one of the most overlooked Indy 500 winners in its 100-year history, but gritty drivers obsessed with the 500 are part of what makes the race great, says David Malsher.

It’s common for the media to look down their noses at the Indy 500s from the early Indy Racing League era. All the good drivers and teams had stayed in CART, goes the argument, so they were racing elsewhere on Memorial Day Weekend. IMS had to make do with leftovers.

But the point is, you can only fight the opposition who show up and that’s precisely what Lazier did successfully in the 80th Indianapolis 500, and Hemelgarn Racing provided him with the most competitive car of his career. Suddenly, on May 26, 1996, by switching from CART to IRL, all those years of trying too hard to make an impression in cars with shaky suspension, fragile gearboxes, faulty electrics and worn-out engines – all that just melted away, as the Colorado native conquered the most storied racetrack of all and drank the milk as he stood in Victory Lane.

Well, less stood, more kinda crouched. Prior to the Month of May, Lazier had suffered a major crash at Phoenix and two bones in his lower back had 16 fractures and he had 25 large chips out of his sacrum. Those who don’t care to know what that is will nonetheless understand that a mere two months later, and after an endless month of Indy practice, the 3hrs22min46sec spent completing 200 laps of IMS had taken their toll on Lazier’s otherwise sturdy frame.

And now, on the 20th anniversary of his victory, 48-year-old Buddy has returned to the Speedway and in the near certainty that his list of eight DNQs since his first attempt to qualify for the Indy 500 in 1989 is unlikely to increase. There are only 33 cars entered this year, and so there’s no danger of him suffering the disappointment of going home a week early, as he did last year.

Lazier Burns Racing has been assembled by Bob Lazier, who is father to Buddy and ex-Indy car driver Jaques Lazier, and who himself competed at Indy in 1981. Bob’s partner is Indianapolis-based contractor Thom Burns, whose Burns Racing team fielded the Indy 500 cars of Dominic Dobson back in the early 90s.

The little LBR team is still lacking a primary sponsor, but is being prudently run by veteran manager Larry Curry, most famous for guiding Tony Stewart to the 1997 IRL title. The Dallara-Chevrolet itself has been prepared by mechanics Butch Winkle and Damon Sturrock, at Sturrock’s Indianapolis-based auto restoration business, Snakepit Customs.

Lazier may be walking like a man with the weight of the world on his shoulders, his stooped frame a legacy of that shunt 20 years ago, but he has kept himself trim and still has forearms like Popeye. And his mood is light, his enthusiasm palpable.

“I’ve always loved coming here over the decades,” he tells Motorsport.com, “because it is a special facility and it’s always a special event. But this one, the 100th running, is very special. If you’re an open-wheel racer, you’re going to want to be here.

“It’s a very impressive field, and it’s really neat to see the way the series is going, because of the level of talent and the amount of youth that’s here. American drivers, too. I’m excited for IndyCar and I want to be a part of it.”

And, barring unforeseen circumstances, he will be. Despite turning just 14 laps on Monday due to an electrical issue and 38 on Wednesday, Lazier has already broken through the 220mph barrier and he’s impressed with the efforts of his team.

“We’ve been working on building an IndyCar program over the past three or four years,” he explains. “Last year was not a good year; we had too many things fall apart at the last minute, and no resources. This year we’re back to making progress and we have a nice little package.”

It wasn’t always thus, but Buddy isn’t a moaner.

“But as a small team, the real satisfaction comes from going out and embarrassing some big teams. Well, we are that small team, but we’re a team that deserves to be here; we’ve got really good guys on board.”

In recent years, it’s become a tradition for Lazier to be one of the final Indy 500 entrants to be confirmed, as he gathers the money, car and staff together and hits the track for the first time just a day before qualifying. This year, despite doubts cast in some quarters about whether he’d be able to again pull the proverbial rabbit from the hat at the last minute, he’s actually better prepared, and planning to take advantage of the fact.

“Yeah, it’s a luxury to actually have more than one practice day!” he smiles. “The last three years, we’d start on Friday and try and qualify on Saturday. But now we’re going to have enough track time to work on the setup and have ourselves a better racecar.

“Last year our racecar wasn’t right, but now it is, and it’s a dramatic difference. We purchased this car from Lotus, when I was helping Jean Alesi back in 2012, and it’s the one I’ve campaigned for the last three years.

“Obviously it’s gone through updates and autoclaves – it’s almost not the same car any more! – but it has very few miles on it and it’s never run anywhere except Indianapolis. But ironically, it was one of the first DW12s built. There are one or two differences between it and a current Dallara, that you could argue put us at a disadvantage – things like center of gravity adjustments, and so on. But I think it’s a wonderful car for a small team to have.”

One of the most admirable aspects of Lazier’s campaigns in recent years have been his ability – like Townsend Bell’s – to just hop in an Indy car and lap IMS at 220mph. But in TB’s case, he at least keeps himself road course sharp, driving GTs in IMSA’s United SportsCar Championship, and normally hooks up with a strong team at Indy. For Lazier, it’s a case of going cold turkey for 50 weeks a year, then stepping up to plant pedal to the bulkhead each May and work within the confines of a small team.

“For me, it doesn’t take long to blow the rust off,” he comments. “I grew up a road racer, but it’s on the ovals where I’ve found success, particularly this oval, and I still like taking the car to the edge. It’s done in a wise way now, using the skills I’ve acquired over the years, but I still get a kick out of doing it, and that’s what the Month of May is all about, for me.”

Lazier does sound unsure whether the 100th Indy 500 will be his last, and avoids answering that question directly. Instead he says: “I still feel I have plenty to contribute as a driver. I’ve aged but I still feel very aggressive and very good.

“But I also can’t tell you I’ll be doing this a whole lot longer. I have a 17-year-old son [Flinn] who’s racing sportscars,” he continues, “and although I wouldn’t have chosen a racing career for him, it’s too late – he’s committed! But I do enjoy sharing that with him, as my father shared it with me.”

The idea of a third generation of Lazier in the Indy 500 one day has an appeal, especially if Flinn proves as tough and resilient as his old man. But one wonders if the kid (or anyone) could match Buddy’s appreciation of – and addiction to – the Speedway.

Lazier’s determination to continue returning to Indianapolis Motor Speedway, year after year, shows the same tenacity he displayed 20 years ago this month, as he gritted his teeth, relied on adrenaline to numb the pain in his back, drove flat out to the twin checkers, and put his name in the history books.

Chevrolet sandbagging? "I'm just waiting for them to turn the wick up"