Chevrolet’s IndyCar program manager Rob Buckner says that despite tight restrictions by the series throughout the 2.2-liter V6 era, evolution has ensured an “unbelievable” difference between original and current specification.

IndyCar’s 2.2-liter twin-turbo V6 units were introduced along with Dallara’s all-new DW12 for the start of the 2012 season, and will serve their final year in 2022. Within that timeframe, the series has only allowed Chevrolet/Ilmor and Honda/HPD to work on certain areas each year – sometimes bigger, sometimes smaller – in order to help contain costs.

Yet Buckner says that there would be a “remarkable performance difference” between a 2012-spec and current-spec engine.

“A 2012 engine [is] probably in the neighborhood of 100 horsepower down to current race engines, while being massively [fuel] inefficient in comparison, and with poor drivability. It was not a very refined package.

“I think if you could take a 2021 race engine and race it against a field of 2012 cars, it could probably lap the field! It would be unbelievable. That shows how both suppliers have really pushed each other in development and have continuously been getting better.”

Despite the current engine formula being replaced for 2023 by 2.4-liter engines with hybrid units, and both Chevy and Honda stating over the last 18 months that there are only slivers of development potential left in the 2.2, Buckner said the manufacturers will continue pushing.

“For either side, Chevy and our competition, if you stopped now, you’d be left behind next season,” he said. “For 10 seasons, both sides have been on the path of continuous improvement.

“You always think you’ve updated and found something to give you a clear advantage, and then you find it’s almost on par with the competition. Each one is driving the other one forward, relentlessly.

“So we really can’t stop. No doubt if we stopped now, and raced this engine 20-something more times [through to the 2022 finale] we’re going to be behind at the end. So there’s always improvements to be made.

“Four or five years ago we could have said, ‘That’s it. Oh, we’ve explored enough and that’s all we can get out of the 2.2-liter.’ If we would have done that then, we’d be massively behind right now. You have to keep the development process going; running engines on the dyno, revisiting old ideas, maybe hardware development calibration. We won’t consider the 2.2L development officially 100 percent done until it’s raced its final event.”

Asked how difficult it has been to both squeeze the last bit of potential from the 2.2-liter while also tackling the 2.4-liter engines, Buckner said: “Luckily… the homologation table for 2022 is pretty minimal in terms of changes, so there’s few things we can revisit. The fundamental engine architecture is very similar, and the rulebook is quite similar from purely internal combustion side of things.

“There’s things that as we continue to learn and develop on the 2.4, that could be rolled out for the 2.2 next year in its final year of competition – and vice versa. So there’s more engines running, and the staff is kind of looking after these projects at the same time, since we know the 2.2 expiration date is quickly approaching.”

Buckner said that IndyCar president Jay Frye’s aim to have the 2.4-liter cars begin testing in the first quarter of 2022 is realistic, although he said, “The final deciding factor for when it goes on track is going to be integrating the new engine into the car and the cooling system that goes with that.

“There’s a lot of parts and pieces that have to come together before we go on track. Everyone on our side and our competition – there’s been a lot of collaboration to be ready to test for the first time.”

In recent years, Chevrolet’s engines have been regarded as stronger at the top end of the rev range than the Hondas which have produced better lowdown torque. Buckner said those characteristics were hard to change under such restrictive regulation by IndyCar, and didn’t expect them to necessarily change with the 2.4-liter car – yet also added that weak spots will be addressed.

“Our focus has always been on high-speed performance, and I don’t think we’ll drastically change that approach with the 2.4,” he said. “You spend the majority of wide-open throttle time in high-rev range in an IndyCar event, so some of our fundamental decisions will be similar.

“Some things in engine design you lock into earlier in the program, like the entire inlet system, engine block, cylinder heads. Some big decisions you make early on, you carry those forward for years because you don’t get to re-homologate.

“The 2.4 does allow us to do a full clean sheet redesign. Early on, we learned from the 2.2 to make some decisions that could have produced compromises – but engine design is pretty much all about compromises, and the rulebook framework and packaging limitations of the car.
“I have good faith in our group that we’ll address some of our weak points and the 2.4 will be a good package. From the 2023 debut, you’ll see our best and our competition’s best baked in right from the beginning.”

Drivers who have driven for both engine manufacturers have also noted a fundamental difference in the way the trackside engineers operate. HPD is generally seen as more amenable to tailoring its engine mapping to suit individual drivers while Chevy prefers more consistent sets of data from which it hopes all its runners can benefit, and is therefore more restrictive in its choices.

Buckner acknowledged this difference and said he doesn’t envisage a change in policy.

“Our group tries to be pretty controlled and we don’t like running things on the track we haven’t run on the dynos,” he said. “I don’t see that changing too drastically.

“I think it’s easy to overlook the challenge of running 11 cars nearly all the same and expecting them to be reliable. So that’s one of the reasons we don’t let our trackside engineers go too crazy on calibration changes. You’d end up with 11 cars on different calibrations and probably hurt some hardware.

“Clearly there are other ways to do it, but we always prioritize proven options to minimize our risks to hurt performance or reliability… Overall we go to the track with proven concepts backed by data.” 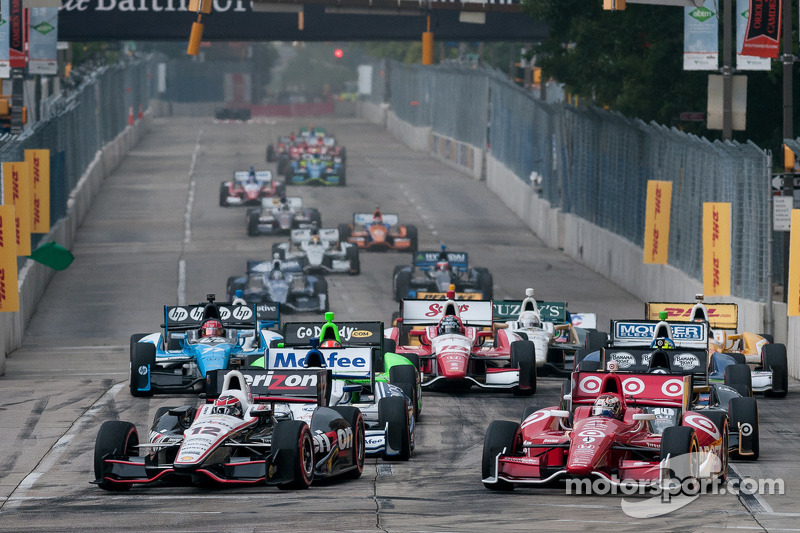 IndyCar race start at Baltimore in 2012.

Ferrucci returns to third RLL-Honda for Mid-Ohio round