Artist Gary Dausch has produced a painting of Dan Gurney, Jimmy Clark and Colin Chapman at the 1963 Indy 500 in order to help benefit the restoration of the Indianapolis Motor Speedway Museum’s Lotus 29.

The artwork depicts Gurney sitting in Lotus 29/1 deep in thought while consulting with Team Lotus founder Colin Chapman and his friend and rival Clark. Gurney was instrumental in persuading Chapman to tackle the fabled Indianapolis Motor Speedway.

Lotus entered a pair of Lotus 29s for Clark and Gurney in ’63 – white and blue #93 for Gurney, green and yellow #92 for Clark. Despite lacking the oval racing experience – and horsepower – of their front-engined roadster-mounted rivals, the pair started fifth and 12th and finished second and seventh that year.

Ford donated Gurney’s white and blue Lotus 29/1 to the IMS Museum in 1973, and the Museum has embarked on a $90k restoration of the machine to full running condition. The car requires an engine overhaul, new fuel cell, tires, suspension, bodywork and paint.

Should the artwork sell through the Museum, Dausch will donate 20 percent of the proceeds to the Lotus project; he’s seeking $4800 for the original artwork and is offering limited-edition prints for $150 each.

Dausch, whose great uncle is Erwin “Cannon Ball” Baker who inspired the legendary Cannonball Run across the USA from ‘sea to shining sea’, worked in Walker Racing’s marketing department for 13 years. He now restores racecars but also produces fine art.

“I see this as a portrait,” said Dausch. “The focus is on a group of like-minded people and a car, which is why I avoided the background. This tiny group ultimately changed the face of Indy car racing. It represents a major moment in automotive history…

“Dan Gurney, Jim Clark and Team Lotus were racing favorites of mine. They had vision, grit, determination and smarts. As a group they weren’t loud about things, but they went out and did their work and had spectacular results with the resources they had. They spoke softly and carried a big stick.”

Dausch’s Lotus 29/1 painting is on display in the IMS Museum gallery, and available for viewing during regular hours and regular admission price. Supporters interested in purchasing the painting should contact Jennifer Hiatt, IMS Museum director of philanthropy and membership, at (317) 492-6563 for information. 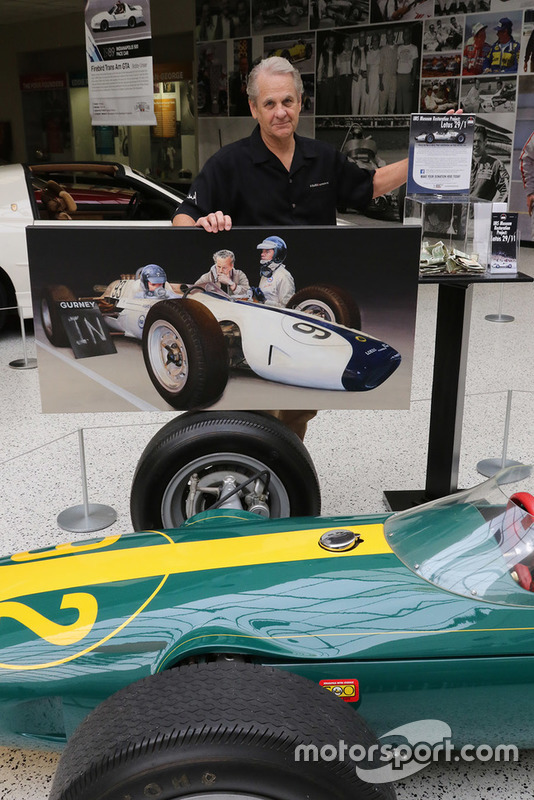 Gary Dausch with the Lotus 29 at IMS Museum

Palou sure he has fair title shot, despite Ganassi conflict

Defending IndyCar champion Alex Palou is sure he will have a chance to retain his crown, despite being only third highest Ganassi driver and on the brink of an acrimonious departure.