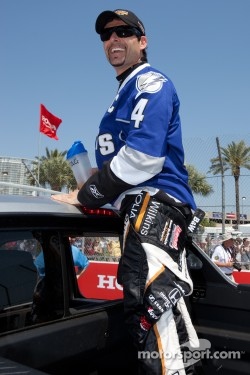 You don't have to be a Rolling Stone to be a "street fighting man," and IZOD IndyCar Series driver Alex Tagliani has proved it on the first two street course races of the 2011 season. He looks to solidify that street fighting reputation when the green flag drops on Sunday's Itaipava Sao Paulo Indy 300 in Brazil.

On the streets of St. Petersburg course in the season-opening race, Tagliani had to fight an ill-handling car and 25 other IndyCar drivers in a racing slugfest for a sixth-place finish. As a result of contact on a restart with another car early in the race, the No. 77 Bowers & Wilkins Dallara/Honda/Firestone machine suffered front suspension damage, making it difficult for Tagliani to turn the car. After the race, he climbed from the cockpit in the Florida heat to show his battle scars -- two badly blistered hands and a swollen wrist.

Two weekends ago, on the streets of Long Beach in sunny Southern California, Tagliani and the Sam Schmidt Motorsports (SSM) team used more of a tactical plan, allowing the driver to throw punches when needed. Strategic pit stops and consistent lap times by Tagliani allowed him to fight near the front most of the race and to come home in fifth place.

The street fighting has paid off for Tagliani as he and the No. 77 Bowers & Wilkins car enter the Brazil race sixth in the IndyCar Series championship point chase. He finished 15th and on the lead lap at the Birmingham race, which was on a permanent road course.

Brazil was the first race of the 2010 season, so this year's event also serves as a "this is where it all started" celebration for the members of the SSM IndyCar team. It was on the streets of Sao Paulo that the No. 77 Bowers & Wilkins car was rolled onto the grid for the first time. Though all the team members remain, including team manager Rob Edwards and Tagliani, it was known as FAZZT Racing until Sam Schmidt purchased the team just weeks before the 2011 season.

It was almost a storybook beginning in Brazil for the new team last year as Tagliani practiced strong and then put the No. 77 car on the front row to start the race next to eventual season champion Dario Franchitti. It was a short race day for the No. 77, however, as Tagliani was forced out only 28 laps into the 61-lap race after contact with another car.

As any street fighter knows, you are going to get knocked down occasionally. But the good ones -- the survivors -- jump back up without dusting themselves off and get back at it. And, that's exactly what Alex Tagliani is ready to do on the streets of Brazil.

Alex Tagliani, Driver of the No. 77 B&W Dallara/Honda/Firestone for Sam Schmidt Motorsports:

Though the Bowers & Wilkins team is only a year old, Brazil is already a special race for you and the team. Why is that?

What I like about Brazil is the fact that the track is really interesting.

"It was a great memory for us since it was our first race as a team. We unpacked our equipment and we were very, very nervous as a group. We had tested at Sebring before, but in Brazil, it was like all the spotlights of the IndyCar Series were on us as we unveiled what we were all about. And then, we qualify on the front row. It was difficult to explain. I mean, I was sitting in the car in qualifying. We had made it into the Fast Six, and we were watching cars pulling back in the garage, like we were watching some Ganassi cars and Penske cars. We were like, 'Man, look at the cars that are going back, being cut from qualifying.' It was one of those days, basically, where we felt really proud. It made all the sweat and sacrifice we put into building the team over the winter worth the effort. We'll never forget that moment."

Last year was the first race on this Sao Paulo circuit. What do you think of it?

"It's quite nice. I'd say, last year when we arrived, the first thing that caught my eye was the fact Tony Cotman (INDYCAR project manager) did a fantastic job with the people from Brazil in preparing the layout of the track and working with what they have. They provided us a long and very interesting racetrack with lots of opportunity for passing. It was a great show last year. I really believe that this year should be even better. What I like about Brazil is the fact that the track is really interesting. Because of the popularity of motorsports in Brazil, we have lots of support from the fans. I speak French, Italian and English and, I don't know why, but everyone who comes to see me there seems to want to speak Italian, so I made a great connection with some fans last year. It's a big race for Bowers & Wilkins, as well. Last year, we got to meet a lot of their guests when we had a dinner with them."

Rob Edwards, Team Manager of the No. 77 B&W Dallara/Honda/Firestone for Sam Schmidt Motorsports:

Do international races create so much extra work that they are not enjoyable? 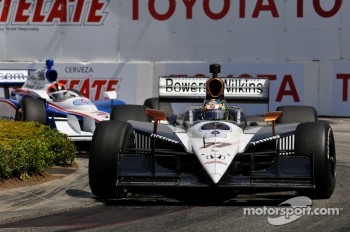 "Actually, we are very excited about heading to Brazil for the next round of the IZOD IndyCar Series. Last year, it was our first event as a team, and so it has special memories, not least because we qualified on the front row. The event last year was very well organized and I'm sure this year will be the same. Apart from a mountain of paperwork, the logistics of the overseas events are very straightforward, not that they are a regular part of the series. Bill van de Sandt (INDYCAR director of operations) and the team at IndyCar do a great job and make it easy for us. We were fortunate that we came out of Long Beach with the car intact and so had no problems meeting our load day on Friday. This year, we are flying on a charter directly from Indianapolis to Sao Paulo, which should make the travel easier. The preparation for the event went very smoothly and allowed us some extra time to spend a couple of days on our Indianapolis 500 preparations, as well, since as soon as we return from Brazil, we will be straight into the month of May."

Give us a team manager's critique of the street course in Brazil.

"Tony Cotman (INDYCAR project manager) and his group did a fantastic job laying out the circuit in Sao Paulo. It is a challenging street circuit with three long straights that allow for plenty of overtaking. Last year, the track was quite bumpy in some of the braking zones, especially into turn five. There was also an issue with the surface on the start-finish straight that was mirror smooth for the dancers during Carnival. That caused qualifying to be postponed until race day last year. The start-finish straight has been ground and there has been a lot of resurfacing work since then, so we should have a great track for an exciting race this year."