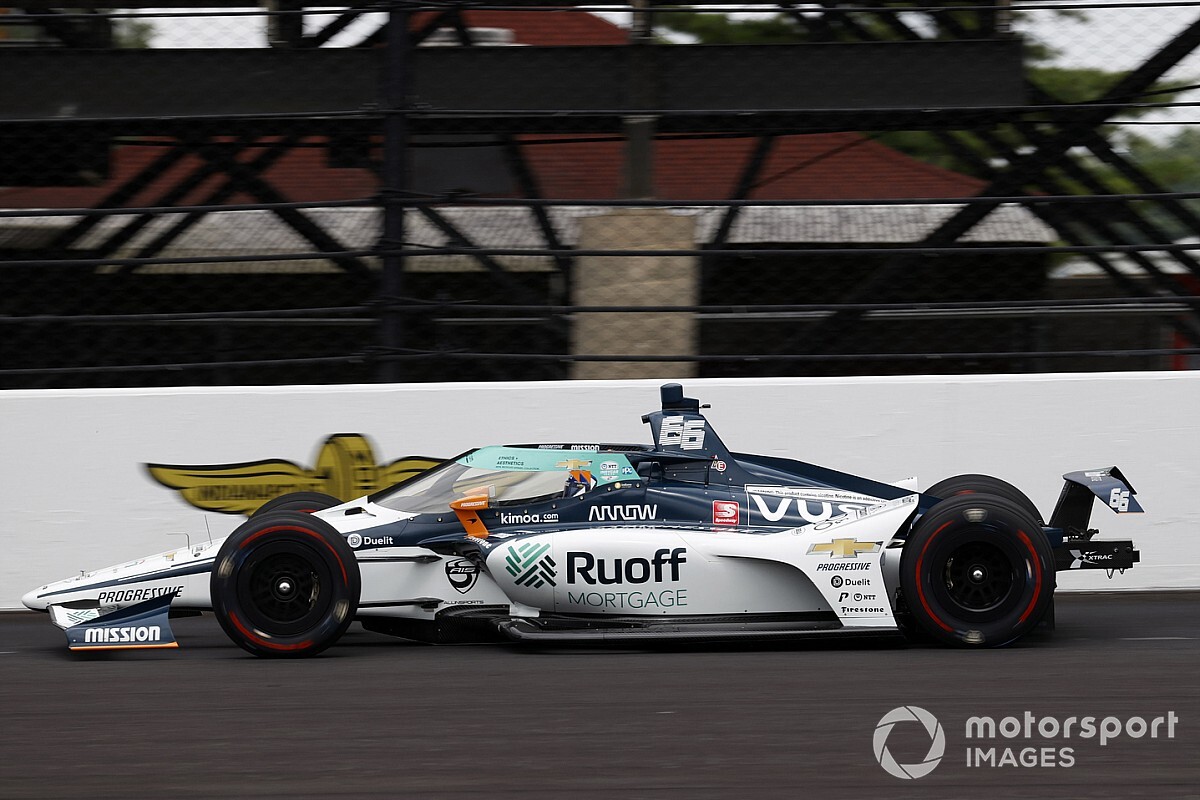 IndyCar has granted the Arrow McLaren SP team a special dispensation to work late into the night at Indianapolis Motor Speedway to fix the damage to Fernando Alonso’s car following his practice crash on Thursday.

After consultation with state and IU officials, IndyCar set a regulation whereby team members need to depart the IMS paddock by 7.30pm each evening, to combat potential exposure to COVID-19 by reducing the number of people on site as swiftly as is reasonable.

However, the extensive damage to the #66 RuOff Arrow McLaren SP-Chevrolet after Alonso struck the Turn 4 wall late in today's practice session led to the squad seeking and gaining a dispensation to stay on to carry out repairs.

Tomorrow is Fast Friday, when all cars’ BorgWarner turbos are tuned to produce 1.5-bar boost –up from the ‘normal’ practice/raceday level of 1.3-bar – in order to prepare for qualifying weekend. Alonso’s crew is expected to be working until at least midnight to fix the car damage.

Taylor Kiel, managing director at the squad, told Motorsport.com that the team could take these duties in their stride, having needed to fix Robert Wickens car following a shunt in 2018 (the year James Hinchcliffe failed to qualify the team’s other full-season entry), and last year when Hinchcliffe shunted on the first qualifying day.

“Right or wrong, this is the third year in a row we’ve had to do something like this at Indy,” said Kiel, “so we’ve gotten pretty good at sorting these things out!

“It’s a pity – everyone had started sneaking down low at Turn 4 because of the way the wind was blowing and because they were getting understeer off of the Turn so they were turning in a bit earlier. We just got that little bit too low and off it went. But hey, these things happen.”

"But the important thing is that Fernando is OK, and thankfully we didn’t have second contact with the pitlane attenuator – we’ve seen that a time or two and it didn’t turn out too well. So yeah, things could have been a lot worse. The engine’s good – Chevy came right over to check it and they’re happy.

“We got special dispensation from IndyCar. They’ve limited track hours but they understand the circumstance in this case, and we’ll be here as long as we need to be to get this thing fixed – probably midnight or so. Our goal is to have the car built and ready for tech tomorrow morning.”

Kiel said he’s not expecting the crash to have any effect on Alonso’s confidence.

“What I remember from last year is a guy who crashed heavily and then went out and went flat right away trying to get his car in the race,” said Kiel, “so I think he’s going to get right back in the car, close the visor and just get on with it.”

Kiel admitted that despite being fully aware of Alonso’s pedigree and ability, he’s still been left impressed by the two-time Formula 1 World Champion. The #66 car was fifth overall and quickest Chevrolet in Day 1 practice, and today Alonso’s best lap was still good enough for eighth-fastest, despite missing the final 45mins of the session.

“Yeah, he’s been very strong – but then he’s been impressive right from the word go in this program,” said Kiel. “When we got the deal done in the early part of the year, we were expecting to have a test day at Texas, an open test at Indy, maybe up to seven or eight sim days and then a full week of practice. Instead, because of the coronavirus restrictions, we got one sim day and then we were on track! Then just three days of practice before qualifying.

“So what he’s been able to do is very impressive – but that’s what you get when you team up with a guy like Fernando. Someone who can turn up in a car that he’s not very familiar with and be on the pace right away. He’s done a very good job.

“Take nothing away from the team though – I think our baseline package here is strong, because we spent a lot of time on it – but pairing Alonso and this car together, I think we can feel very confident.”

“They’re both very professional and thankfully they have similar driving styles so they’re already able to give us good direction, but they and we as a team are able to listen to Fernando’s direction and it aligns, but he’s also able to find the focus. He knows exactly what he needs and what feels right.

"He’s the experienced one of the three right now, so for Oliver and Pato to be able to have this opportunity to work with him at this point of their careers is huge. They’ll be learning until the 200th lap of the race.”

Hampson and Alonso are perfect match

Arrow McLaren SP’s new-for-2020 technical director Craig Hampson, previously at Dale Coyne Racing, is also serving as race engineer for Alonso, a similar role to the one he played at Andretti Autosport, when he ran the extra car at Indy in 2014 for NASCAR star Kurt Busch. And Kiel says Alonso and Hampson are proving to be a perfect match.

"There’s an inherent trust there based on both their résumés that allows each one to put their faith in the other and just get on with it, which is important because time is limited.”