Indianapolis, IN - IndyCar's Andretti Autosport has signed Team Venezuela driver E.J. Viso to pilot a fourth entry in the 2013 IZOD IndyCar Series. Viso will drive the No. 5 Team Venezuela PDVSA Chevrolet joining Andretti's full-season efforts of reigning series champion Ryan Hunter-Reay, James Hinchcliffe and Marco Andretti. The entry is a result of an off-season collaboration between HVM Racing and Andretti resulting in a joint entry supporting Team Venezuela for the upcoming IndyCar season.

The unique three-way deal represents a win-win-win scenario with Andretti Autosport returning to its traditional four-car fulltime lineup, Viso joining the championship-defending team and HVM Racing securing an arrangement that provides for continuation of its business in IndyCar as an incubation to a potential return in 2014 for the Indianapolis-based team owned by Keith Wiggins. 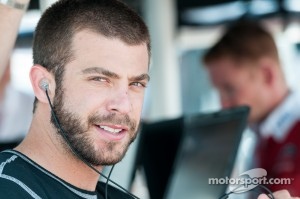 "I could not ask for more than to get the opportunity to drive for a championship team while representing my country," said 27-year-old Viso. "After five years in the series I believe I have found the right environment and look forward to having Ryan, James and Marco as teammates. I'm very proud to be able to move into the 2013 season with this new relationship; it's a dream come true."

Now entering his sixth season with the IndyCar Series, Viso began his racing career via go karts at the age of five, capturing five Winter National Karting Championships. At just 15 he joined the world of Formula Car racing and captured victory at 19 out of 22 events in his debut year. Viso went on to win the Formula 3 British Championship and became the youngest driver in the Formula 3000 International the following year.

The racing veteran continued his climb into the motorsports world by joining the IndyCar Series where he has recorded six Firestone Fast Six appearances, 16 top-10 finishes, and has led a total of 52 laps during his five years racing in North America's elite championship.

A native of Caracas, Venezuela, Viso is deeply rooted in his heritage and a well-respected ambassador to his country. He will represent Team Venezuela as their premiere racer and only Latino-born driver currently competing full time in the IZOD IndyCar Series. Dedicated to the development and support of their native-born racing talents, Team Venezuela has been formed by native Venezuelan and long-time racing supporter Vicente Tralci.

"I have been following E.J.'s career for quite some time and was able to help him get his start in racing 22 years ago," said Tralci. It's an honor to be able to bring this opportunity to him and to pair with Andretti Autosport. It has always been our dream to be partnered with a team of such high reputation or results.

Viso's entry will mark the return of a four-car stable for Indianapolis-based Andretti Autosport, who decided to focus on a three-car effort following the 2011 season. The four-time champions, led by racing legend Michael Andretti, will once again be the largest team operating under the INDYCAR umbrella, committed to fielding four full-time IndyCar entries (five entries for the 2013 Indianapolis 500 with the addition of Carlos Munoz), two Firestone Indy Lights entries, two Pro Mazda Championship entries and entries in the USF2000 Championship powered by Mazda. Andretti Autosport also remains the only team to compete at each step on the Mazda Road to Indy ladder.

"We are happy to welcome E.J. (Viso) to the team and to again be running four cars," said Andretti. "He has shown speed in his early years as a driver which we view as very promising, and his personality will lend well to the overall chemistry of the drivers and crew. I'd like to thank Keith (Wiggins) and HVM for their assistance in this project."

Andretti upbeat for Indy 500, happy his dad is strategist

Grosjean on Nashville qualifying: The car “came to life"

Palou sure he has fair title shot, despite Ganassi conflict

Defending IndyCar champion Alex Palou is sure he will have a chance to retain his crown, despite being only third highest Ganassi driver and on the brink of an acrimonious departure.