Andretti's Muñoz is the highest finishing rookie on Indy 500

Carlos Muñoz was upset he could not challenge Tony Kanaan.

The 21-year-old Colombian led today's 500-mile race for 12 laps and recorded the fastest leading lap at 223.651mph. Getting out of the No. 26 Unistraw Chevrolet, Muñoz, surrounded by family, was upset he could not challenge Tony Kanaan (due to the race ending under caution), but was extremely proud of a second-place finish in his first Indianapolis 500. Munoz also scored the honor of highest finishing Rookie. 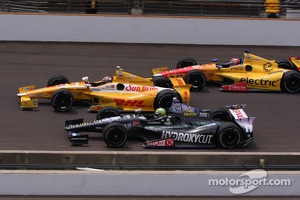 At the beginning, I was a little bit nervous with the pit stops, but in the end, the car was great and it's a good second place. Hopefully in the future, I will be able to drink milk. Right now I'm thirsty, but hopefully it's in the future for me."

On speculation of how the would have ended if not for the last caution: "It's racing. You don't know what could have been. I think I had a great car and a great shot to overtake (Tony Kanaan) on the front straight, but you never know. He did a great job."


Hunter-Reay thought his No. 1 DHL Chevrolet was the car to beat today, but circumstances proved against him as the American brought home a third-place finish - his personal best at Indianapolis. The crowd on-hand saw plenty of the DHL car at the front, as the Florida resident led 26 laps and was among the fastest cars on track all day.

"That's just the way it works out. That was bad luck. We were leading on that last restart. I knew I was a sitting duck and I wasn't too bummed about it because I knew we had enough laps to get it going again and have a pass back and maybe I would be third on the last lap which is where I wanted to be and it didn't work out that way.

There was a crash in Turn 1 and the race ended. It's unfortunate. Big congratulations to Tony (Kanaan), though. He has been there so many times had bad luck and for whatever reason the race has alluded him. Great champion, certainly deserves it. But man am I disappointed. I think the DHL No. 1 Chevy was the car to beat today.

Had we been at the right place at the right time I'm confident we would have won it and that's just the way this place goes. This entire Andretti Autosport team did a great job all month. Thanks to all the fans for coming out, and congratulations, again, to TK."


Marco Andretti drove an aggressive but calculated race today, leading 31 laps and bringing the No. 25 RC Cola Chevrolet home in fourth place. It was his fourth top-four finish at Indianapolis and his first since scoring third-place in 2010. The third-generation driver now leads the championship points standings.

"I think when we went for the trim, we were kinda in the worst case scenario; we got shuffled back behind the teammates. Carlos (Munoz) is a tough one to follow - but he drove a heck of a race. Congratulations to Tony Kanaan. Thanks to the RC Cola crew for giving me a great car for the entire month."


Making his best Indy 500 start to date in fourth, Viso was seen leading the 500-mile race for five laps prior to a pit stop that ended his chances of claiming victory. The Venezuelan fought back from the 25th position to cross the finish line in 18th.

"I'm extremely happy for the team. This is an amazing improvement for everyone, especially for me and my career. Being with this team...means a lot. Being able to be in the top five for pretty much the first three-quarters of the race was amazing running with those guys is where I should be running all the time.

A little mistake here in the pits - I selected neutral too fast and I stalled the e ngine and that pretty much ruined our race. We were hoping for a yellow the last part of the race, maybe not that late, but maybe 23 laps to go, and we were going to be able to maybe shoot for the top 10. I'm happy for the team - very happy for them. We have a strong car and this year is going to be a good year for us."


The Mayor of Hinchtown's day looked promising early on, as the No. 27 GoDaddy Chevrolet stayed with the lead pack. Hinchcliffe led seven laps as the team was on a slightly different strategy, looking to hit a fuel number good enough to put them out front at the end. However, on Lap 133, the 26-year-old made light contact with the outside wall exiting Turn 2. It didn't end his day, but the Canadian finished 21st.

"We just didn't have the speed today; it's unfortunate because it wasn't the handling, the car was just a bit off. When the pack is running 25 cars all on the same straightaway and you're just a little bit off on speed than you're just a sitting duck. It's so tough to move up and keep guys behind you, but we had an eventful race trying to stay in the lead pack.

The engineers did a good job, the car was handling well and the guys were unbelievable in the pit stops. I feel bad that the GoDaddy Chevy didn't finish a bit higher and they deserved a lot better than what we got. It's a tough pill to swallow, you hate something like that on any race day, but certainly not this one. I'm happy for the team.

I'm gutted that the last yellow flag came out when it did and potentially cost the team a win because this whole organization has done an incredibly great job. (Positions) Two, three and four speaks volumes of our crew. Congrats to Tony (Kanaan) and the KV Racing guys, we'll regroup and go win two in Detroit."

What ‘second screen experience’ means for the Bathurst 1000