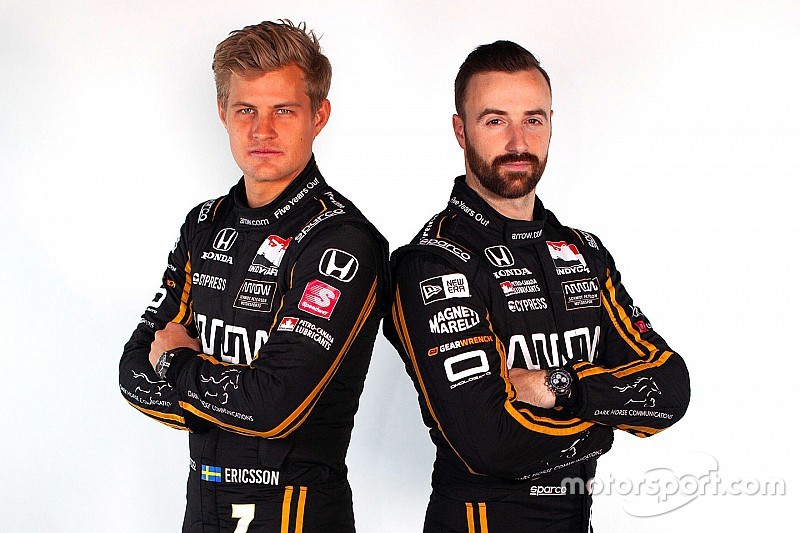 Arrow Electronics has extended and expanded its investment in the Schmidt Peterson Motorsports IndyCar team to provide principal sponsorship for both James Hinchcliffe and ex-F1 driver Marcus Ericsson.

The Centennial, CO.-based company has already spent four years as the main sponsor for Hinchcliffe’s #5 SPM-Honda, and has thus been to victory lane three times – at New Orleans 2015, Long Beach 2017 and Iowa Speedway 2018 – and backed the pole-winning car at the 2016 Indianapolis 500.

Upping its investment for 2019, Arrow has become the title partner for the team, so henceforth the Indianapolis-based squad will be known as Arrow Schmidt Peterson Motorsports. Both Hinchcliffe’s car and Ericsson’s #7 car will now carry the black and gold (now matte rather than chrome) that had become synonymous with the #5.

Also at the launch in Denver’s Pepsi Center this morning was the #6 car of Robert Wickens. Although the 29-year-old Canadian is still recovering from his huge Pocono shunt, team co-owners Sam Schmidt and Ric Peterson have pledged to keep the car and number on standby for whenever the 2018 Rookie of the Year wishes and feels able to return to the cockpit.

Arrow’s involvement in Schmidt Peterson started with its working directly with Schmidt on the semi-autonomous motorcar – appropriately named SAM. Schmidt, a former IndyCar racer, was rendered quadriplegic by a shunt in testing at Walt Disney World Speedway in 2000 and has helped evolve Arrow’s technology for crippled drivers.

In 2014, he lapped the Indianapolis Motor Speedway in a converted Corvette Stingray, using Arrow’s head-tilt technology. With Arrow’s significantly evolved system in ’16 – using motion capture technology, steering the car with his head, and blowing down a tube to apply the throttle, and sucking on it to apply the brakes – Schmidt lapped IMS in a Corvette Z/06 at an average of 108mph and hit 152mph.

Later that year he took the ’Vette up the legendary Pikes Peak Hillclimb course, and went on to become the first American recipient of an autonomous vehicle driver license in his home state of Nevada.

Schmidt admitted that Arrow’s new partnership with his team meant the company had provided him with a second life-changing experience.

“For me, this announcement is nothing short of a lifelong dream come true,” he said. “Mike Long [chairman, president and CEO] and the entire team at Arrow first had the vision to create a system that enabled me to get behind the wheel after 16 years of paralysis which, in and of itself, has changed my life and the lives of millions worldwide.

“Now, by becoming our team title partner, they have given us the resources to fulfill another lifelong dream – to win the Indy 500 and a championship in the IndyCar Series.”

Peterson added: “We couldn’t ask for a better partner for our team than Arrow. They’ve been by our side the last four years through the highs and lows, always pushing us closer to our goal: becoming champions. We’re very excited for this next chapter of Arrow Schmidt Peterson Motorsports.”