The rain-shortened race at Barber Motorsports Park is now behind us, so let’s see how the rookies did.

Aleshin was doing well in the early part of the race. He was passing and re-passing Sebastien Bourdais after Bourdais got around him. However, after getting tagged by Bourdais in turn five, he wasn’t able to get back to where he was. Aleshin ended the race against the barrier coming out of the turn 13-14 area of the circuit, which ended the race under caution. He drove like a veteran in the early stages of the race and wasn’t intimidated by Bourdais, so I’ll give him 3/5 for the race today. 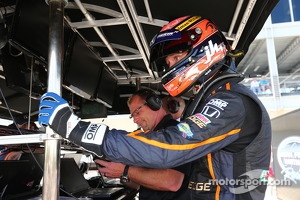 Hawksworth was the highest finishing rookie and really improved a lot given that at the start of the weekend, he wasn’t able to put in good times in practice or in qualifying. He moved up through the field slowly but surely and was able to get as high as tenth before Ryan Briscoe and Charlie Kimball both leapfrogged him in the last round of pitstops. He improved the most from where he started the weekend, so he’ll also earn 3/5 for his performance today.

Huertas’s only real highlight of the day was spinning his car coming off of turn five and creating the last yellow flag before Aleshin’s accident. He was able to get his fastest lap of the race in the last lap of green flag racing, so at least he was keeping his foot in it the whole race, but he wasn’t a factor in the race really at all. I’ll give him 3/5 since he didn’t go down far from his starting position and at least was trying at the end of the race.

Munoz had a lot of good things going for him today but for some reason, he spun the car under yellow and damaged the front of the car. He got back in the car to do a couple of laps but stopped afterwards. Spinning the car under yellow and going into retirement isn’t something that should happen to you especially when you have a car capable of getting into the top ten and you won the Indy Lights there the previous year. Because he spun under yellow, he’ll earn 2/5 for this race.