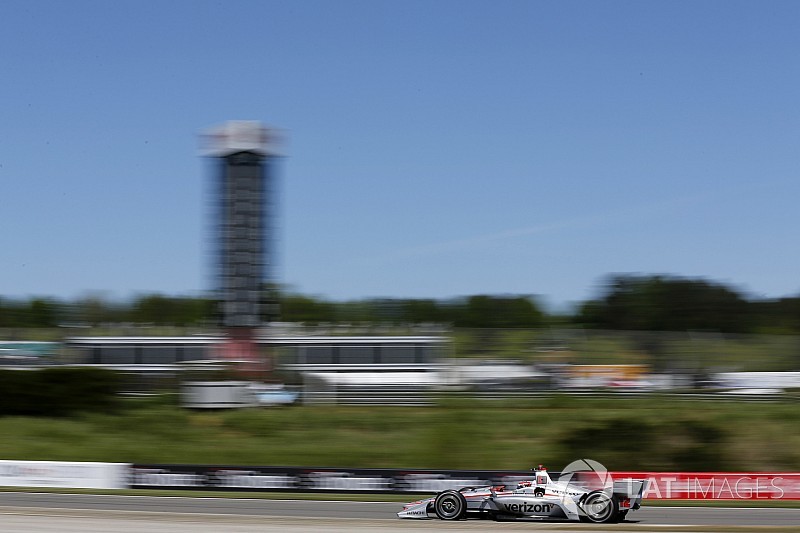 Laptime improvements had been modest in the first half of the session, but the first stoppage, caused by Rossi, shook up the order.

The Andretti Autosport driver lost the rear end of his car heading into the tight, long right-hander of Turn 15 and came to a stop on the outside grass.

When the session resumed after a few minutes under red flag conditions, Newgarden was first to top the times with a lap of 1m07.9141s.

Power quickly went second as he lapped 0.2375s slower than Newgarden, and it was then a trio of IndyCar champions with Chip Ganassi Racing’s Scott Dixon lapping third moments later.

The increasingly quick laptimes were paused not long after as Newgarden suffered snap oversteer on the long run down to the heavy braking zone of Turn 5, spearing him across the gravel and to a stop.

He was helped back onto the track and on his return to the pits was an eventful one as he sprayed the gravel debris on the track.

After four tires were changed on his car and debris removed, he returned to the track and had no answer to Power’s improved benchmark of 1m07.5987s set moments before Newgarden’s off.

Dixon was the next best finisher to Penske in third, while Carlin’s Max Chilton was an impressive fourth place. Dixon’s teammate Ed Jones was fifth ahead of the third Penske car of Simon Pagenaud.

The top 10 was rounded out by Dale Coyne Racing’s Sebastien Bourdais and Andretti’s Zach Veach, with the second Carlin entry of Charlie Kimball finishing 12th behind Takuma Sato.

Schmidt Peterson Motorsports had struggled at Barber in pre-season testing and did so again in first practice, with Robert Wickens finishing 13th and his teammate James Hinchcliffe only 18th.

Rossi’s earlier red flag disrupted his session, meaning he was only 20th at the flag.