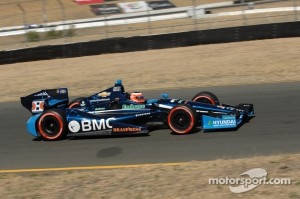 Barrichello, No. 8 BMC | EMBRASE – KV Racing Technology Chevrolet/Firestone machine, a veteran of 19 Formula One seasons, but in his first IndyCar season, is contesting his first race here on the 2.358-mile, 12-turn permanent road course, although he tested here twice at the beginning of the year. The international super-star ran in group two in round one and posted the sixth fastest lap of the 14 drivers in the group with a time of 78.9330 seconds. In round two he recorded the 12th fastest lap, 78.9788 seconds (108.713 mph), of the 12 drivers, but is expected to move up one position to 11th when a penalty for an unauthorized engine change is accessed to Justin Wilson who qualified 10th.

"I was happy that we made it through to the second round of qualifying,” Barrichello said. “We made an adjustment after the first round, but the car was still on the limit. Hopefully, with a good strategy tomorrow I will be looking at a top-five finish."

Barrichello, 40, has qualified in the top-10 three times this year including a season-high fifth on the oval at Milwaukee (started third due to penalties), and a road/street season-high 10th (started seventh due to penalties) at Edmonton This is the second time this season that he has reached the second round of road/street course qualifying (also made it at Edmonton). Barrichello, a native of Brazil, is 17th in the championship standings with 215 points, 41 out of 10th on the strength of five top-10 finishes with a season-high seventh on the oval at Iowa and a street/road course high eighth at Barber. He has also finished 11th twice, Toronto and the Indianapolis 500 where he won the Chase Rookie of the Year Award.

Kanaan, No. 11 MOUSER ELECTRONICS | GEICO – KV Racing Technology Chevrolet/Firestone car, who is making his eighth appearance in Sonoma also ran in group two in round one. He clearly had a fast car, but finished ninth in the group with a qualifying lap of 78.9475 seconds (108.756 mph), after getting blocked during his fastest lap and did not advance to second round. Kanaan is expected to start 16th after penalties to Wilson and Sebastian Saavedra, also for an unauthorized engine change.

“I had a solid first timed lap and the car felt good,” Kanaan said. “On my next lap I was running three tenths of a second faster, but I got blocked going into turn four. That pretty much ended any chance of getting into the second round of qualifying. We will just have to see what we can make happen in the race tomorrow.”

The immensely popular Kanaan has qualified in the top-10 a team-high seven times this year with season-high sixths on the road course at Barber and on the oval at Milwaukee. He has made the second round of road/street course qualifying a team high four times and the Firestone Fast Six (the final round of road/street course qualifying) once, at Barber. Kanaan has now qualified in the top-10 six times in eight tries at Sonoma with a best starting position of third in 2005 and 2007. In seven previous races he has finished in the top-10 five times with a victory in his Sonoma debut in 2005. The 37-year-old Brazilian is seventh in the championship race with 307 points, 72 out of first and nine out of fifth. He has seven top-six finishes in the first 12 races this season including three top-three showings (season-high second at Milwaukee and thirds at Iowa and Indy). Four of his top-six finishes have come on road/street circuits (fourths at Toronto and Long Beach, sixths at Detroit and Mid-Ohio).

Viso, in the No. 5 CITGO | PDVSA – KV Racing Technology Chevrolet/Firestone entry, will be contesting his fifth race in Sonoma. The competitive and determined Venezuelan qualified in group one in round one and logged the 10th fastest lap, 79.3953 seconds (108.142 mph) of the 13 drivers in his group and therefore didn’t advance. Viso expected to start 17th after penalties are accessed.

“Coming to this race track, which I really like, this is not the way I expected qualifying to go,” Viso said. “I believe today’s result happened because of the issues we had in both the practice sessions prior to qualifying. In yesterday’s practice we had a mechanical problem that affected the fuel pressure and this morning we had a non-team related software problem that affected the clutch. Since we did not test here last week, did not get any productive practice laps and never even ran on new tires, we went into qualifying with a car we did not know. It was an extreme and difficult situation however I have a lot of faith that we can still have a good race.”

Viso, 27, has been one of the team’s best qualifiers this season especially on the road/street courses. He has qualified in the top-10 five times, made the second round of road/street course qualifying three times and the Firestone Fast Six a team-high twice, season-high fifths at Long Beach (started 15th due to a penalty) and at Detroit. In four previous races in Sonoma, Viso has a best starting position of ninth in 2011 and a best finish of sixth in his Sonoma debut in 2008. Viso, who has earned three top-10 finishes including a season-high fifth at Milwaukee and a road/street course best eighth at St. Petersburg, is 20th in the standings with 198 points.