De Silvestro had a solid four-lap run with an average speed of 225.400 on her first qualifying run of the day. Kanaan followed with a qualifying run that averaged 226.949 putting him in 7th place at the time.

Indianapolis, IN (Saturday, May 18, 2013) - It was a drama-filled day at the Indianapolis Motor Speedway today with qualifying being delayed due to rain. De Silvestro, driver of the No. 78 Nuclear Clean Air Energy car was first up having drawn 10th in the qualifying order, while Kanaan, driver of the No. 11 HYDROXYCUT - KV Racing Technology - SH Racing Chevrolet/Firestone car was scheduled to qualify 42nd. 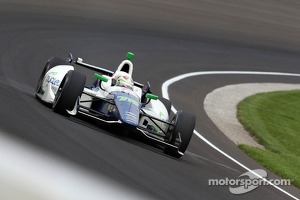 De Silvestro had a solid four-lap run with an average speed of 225.400 on her first qualifying run of the day. Kanaan followed with a qualifying run that averaged 226.949 putting him in 7th place at the time. Unfortunately, faster cars followed dropping the Brazilian to 12th on the starting grid for next Sunday's race.

"This place is unbelievable," Kanaan said. "I always have such a good experience with the fans here. About my run, I think we were a bit conservative thinking that we would have more time during the day to try another shot after getting comfortably in the show. But I won't complain about starting 12th because I don't think that we had it for the pole, but like I always say, it's not about where you start this race, it's how you race it to the end. We will go back to race trim tomorrow and get the #11 HYDROXYCUT Chevy Firestone ready for the one that counts on Sunday."

De Silvestro's road through qualifying was a bit more stressful than Kanaan's. After a quick practice run during a break in qualifying, De Silvestro's 22nd place time was pulled so that she could try to improve her position. She ended up posting an average speed of 225.226 which while slower than her first run was still good enough for 24th and final position of the day.

"I think we kind of shot ourselves in the foot a little bit by withdrawing our first time," De Silvestro said. "I'm pretty sure we had the speed to be a little bit faster, be even higher up there, but then we picked the wrong gear and that made us a little bit slower, which made everything a little bit more exciting. The race car was really good, but I think there was some more speed in it. I'm just happy to be in the race. Hopefully we can work on the race car for the race from now on so that we have a great race."

Team co-owner Jimmy Vasser was hoping for a better qualifying result, but was happy that both cars made it into the field today so that the team could turn its focus to race setup. "I wish we had both cars in the fast nine as Chevrolet definitely seemed to be the power plant of the day," he said. "However we didn't have the cars to do this. We have been concentrating mainly this week on race setup and I believe both Tony and Simona will have good cars for the race next weekend."