Bourdais is looking for the podium in his KVSH debut.

Bourdais, who will pilot the No. 11 Team Hydroxycut KVSH Racing Chevrolet/Dallara/Firestone machine on the challenging 1.8-mile, 14-turn temporary street circuit, will be making his first start for KVSH after agreeing to drive for the team following the conclusion of the 2013 season.

"I am really pumped for the start of the season with KVSH Racing and all my sponsors; Hydroxycut, Circle K, Mistic E-Cigs, GEICO, Plantronics, American Racing Wheels, everyone," Bourdais said. "The team and I came to an agreement early and I think that has paid off in terms of getting a full off-season of testing. I think overall, things went well, but you never really know until you get to a race. At this point, based on our testing, I'm confident we will be competitive and I am looking forward to getting started."

KVSH partner Jimmy Vasser said, "As a team, I can say that we are very excited to get the season started. We signed Sebastien early knowing that we wanted to open the season prepared and ready to challenge for podiums and race wins right away. We have a great group of guys assembled on the engineering and crew side and a proven winner behind the wheel. Now it is time to go racing."

"When you're through changing, you're through...is a theme that's carrying us into battle for 2014," said KVSH partner James "Sulli" Sullivan. "You'll see a lot of new from us at the season opener. St Pete is in many ways our coming out party and we expect to make some headlines." 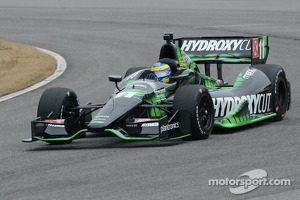 Bourdais, 35, who was born in Le Mans France and resides in St. Petersburg, Florida, is the only driver to win four consecutive championships taking the Champ Car World Series title in 2004 through 2007. He is tied for second in all-time championships with Mario Andretti and Dario Franchitti with four although Bourdais did it in far fewer seasons (Bourdais, seven seasons, 112 starts, Franchitti, 17 seasons, 263 starts, Andretti, 29 seasons, 407 starts). Bourdais has won 31 U.S. based open-wheel races placing him eighth on the all-time list and seventh on the all-time list with 31 pole positions. Internationally, he competed in 27 Formula One races for Scuderia Toro Rosso (2008 - 2009) and has an impressive endurance racing record including a victory at the 2014 Rolex 24-Hour, a third at the 2014 12 Hours of Sebring, 10 starts at the 24-Hours of Le Mans (one pole and three second place finishes, 2007, 2009 and 2011), four ILMC wins and two second place showings at Sebring. Bourdais also won the FIA International F3000 championship in 2002 and the Grand Am Rolex Sports Car event at Indianapolis in 2012.

Bourdais will be competing at St. Petersburg, where he resides with his wife Clare and their two children, for the fourth time although he did not start the race in 2011. In two previous races (2012 and 2013) he has a best starting position of 21st and a best finish of 11th both last year.

Commenting on racing in his hometown of St. Petersburg, Bourdais said, "Racing at home is always fun. You get to sleep in your own bed and you know that people are cheering for you, but you still have to go out and compete. This is a challenging street circuit and like all street circuits it is about getting the right setup and qualifying well."