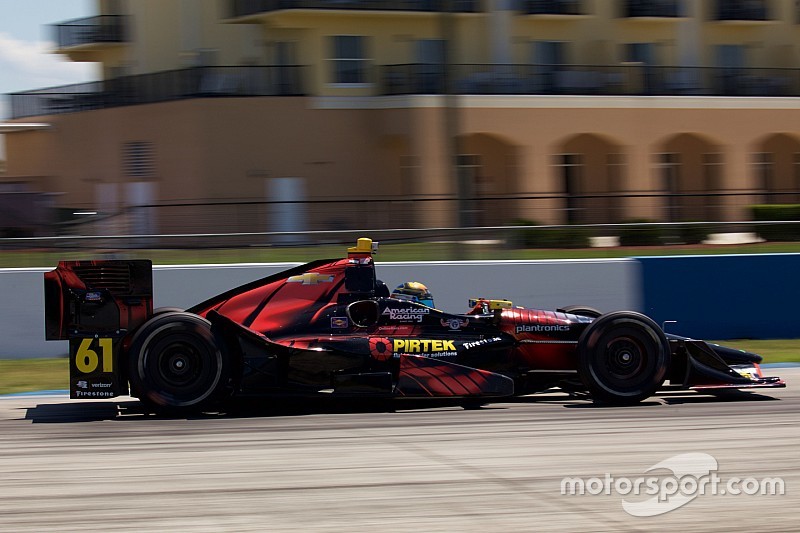 Matt Brabham, who will drive the Pirtek Team Murray-backed KV Racing entry, tested at Sebring Raceway today in preparation for the Grand Prix of Indy, before attempting to qualify for the 100th Indy 500.

The Florida-born son of four-time IMSA champion Geoff Brabham ran 134 laps on the 1.67-mile version of the road course in Sebastien Bourdais’ car but re-branded in Pirtek colors and carrying the number 61.

The race number is a tribute to Brabham’s grandfather, Sir Jack, who started Indy car racing’s rear-engine revolution at IMS in 1961 driving a Cooper.

Working with his engineer Andy Brown and an experienced crew from KV Racing, Brabham worked through a list of setup programs as well as many possible race scenarios he may have to adapt to.

He said: “To arrive at the track at 7am this morning and see the car in Pirtek Team Murray branding really brought home that this whole program is real.

“I really enjoyed everything about the day and learnt so much from Andy Brown, Mitch Davis and all the KVSH Racing crew who really threw everything into the day.

“These cars are obviously a lot more physical to drive than open wheels cars I have been used to in the past and it was a typical hot Florida day, but apart from being a little stiff in the neck, which is to be expected, I feel great. Jim Leo has been working me hard every day at PitFit Training in Indy and that work is obviously paying off.

Sebring was the venue where Matt’s grandfather famously had to push his car over the finish line to win the 1959 Formula 1 World Championship, while his father also won the Sebring 12 Hour sports car race twice.

Said the 22-year-old: “I have always liked Sebring and obviously my family has some great history here, so to come through the day without any issues and 134 laps under my belt ticks a big box for us.

“I wish I was doing it every day, but I have to wait a couple of weeks before I am back in the car and I am already counting down the days.”

Race engineer Andy Brown, who won the Indy 500 as engineer for Al Unser Jr.’s Galmer entry in 1992, referred to Brabham’s two one-day tests with Andretti Autosport last year, saying: “You would not have believed Matt has driven these cars as little as he has.

“His feedback has been detailed and very clear and precise, which is only going to serve us well and place us in good stead as we move forward into the Grand Prix of Indianapolis and the 500.

“He has hardly put a foot wrong all day and we have made some really good progress, so I am looking forward to the next couple of events. Inexperience can catch you out on days like today, but he seems to have an old head on young shoulders.”

”I was delighted with how quickly Matt and Andy Brown became a cohesive unit. It was like they have been working together for years.

“It was great to have Matt’s dad Geoff looking on from the pit lane and I am sure Sir Jack had a smile on his face somewhere.”

Coyne will run Pippa Mann at Indy but admits concern