The field is now set for the Memorial Day classic at the Indianapolis Motor Speedway. 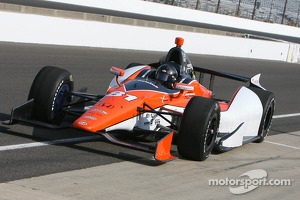 The surprising turn of events Sunday propelled Legge, who logged her first track time in the morning practice session (24 laps), into her second Indianapolis 500. Less than 48 hours earlier, her Honda-powered car was a skeleton in the Gasoline Alley garage. Her deal with Schmidt Peterson Motorsports was announced on May 18.

Nearby, Michel Jourdain Jr. buried his head in the shoulder of wife, Nora, as the realization of not even presenting for a qualifying attempt for the 97th Indianapolis 500 Mile Race sunk in.

Legge sat in the No. 81 Angie's List Schmidt Peterson Pelfrey Honda to potentially bump her way back into the 33-car field for the May 26 race. On the bubble at 223.176 mph for her four-lap average speed set five hours earlier, she breathed easier when seeing crew members offering condolences to the veteran driver from Mexico.

By Jourdain's account, and supported by teammate Graham Rahal after turning five laps on the 2.5-mile oval late in the six-hour session, the car just wasn't comfortable to drive. The chassis is the same that Takuma Sato challenged for the lead on the final lap in last year's race and last driven by Mike Conway at Long Beach in mid-April.

There are four first-year Indy 500 competitors and four females in the field.

MICHEL JOURDAIN JR.: "It's so hard because the guys tried so hard, but we struggled a lot. And some days it was feeling a little better, but it was just never really there. You know, this morning we tried James Jakes' setup, and it was impossible to drive. And then we tried Graham's setup, but it felt exactly the same and we couldn't drive it. It felt exactly the same. We changed whatever we had time to, but it just felt the same, and we couldn't drive it."

KATHERINE LEGGE: "Relief. Obviously, it's not nice to do it in that manner; I feel bad for Michel. It's not nice for him to not have the opportunity. However, I am happy I am in the field. I'm not going to lie about that. I'm going to sleep tonight for the first time in a few days. I feel really bad for Michel. I can't even think what's going through his head. I'm gutted for him."

BUDDY LAZIER: "It's really about the team. They did a great job. Very small amount of time. A lot of hard work, a lot of heart. We were sweating today. Temperature was going up, everybody was struggling." (About driving in this generation of IZOD IndyCar Series car for first time this week): "It's a great car, but it's a huge learning cuve. I just really enjoy being here. Big learning curve, but a lot of fun, too. We never were trying to qualify on the pole, so we've been doing a lot of three-quarter tank runs. We think we have a pretty good race car."

A Week at the Indy 500 Lasts a Lifetime

Servia successfully qualifies for the Indianapolis 500

Castroneves: Being with Foyt, Unser, Mears “blows my mind”

Indycar: Harvey says he’ll cheer for Meyer Shank, even after he exits

Alex Palou: "My dream was to go to IndyCar"

IndyCar: Grosjean to make his oval debut at Gateway