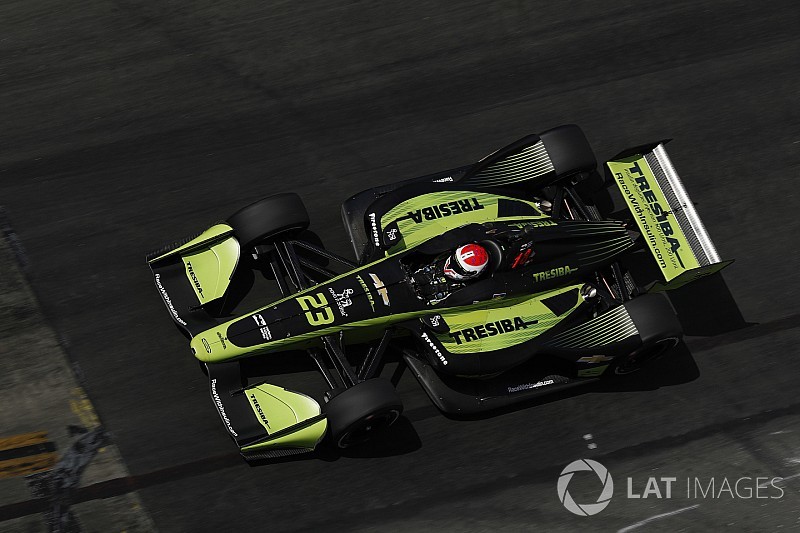 Trevor Carlin says his rookie IndyCar team is gaining traction in the series, after Long Beach saw him get its best grid position and best finish of the season at Long Beach.

Max Chilton qualified 15th out of 24 starters in the Toyota Grand Prix of Long Beach, while Charlie Kimball finished 10th.

“You can only take these things step by step, and I admit Charlie inherited a couple of spots in the race,” Carlin told Motorsport.com, “but then we lost a couple of spots with Max when we didn’t get the strategy quite right. Near the end, we serviced him in a closed pit, so he had to restart at the back.

“I’d say we had a couple of cars that were capable of finishing in the top 10, and one that did that, so for our third race, that’s OK. I’d say we’re now where we wanted to be at the start of the season. I’d love to say Long Beach was our first race.”

Carlin said that Chilton’s qualifying performance was “a bit of a breakthrough.”

He stated: “I think we have a platform now, a direction we need to go in, and so now we’ll go to Barber and the Indy road course… and hopefully build on that. And then we’ll have the Indy 500 and we’ll be rookies all over again, back to square one!”

Driving for Chip Ganassi Racing, Kimball and Chilton led the 500 last year – in fact, Chilton led 50 of the 200 laps. However, Carlin said that would ramp up the pressure this May.

He commented: “Yeah, Charlie’s always been good there, and Max led more laps than anyone last year, but that makes it even worse, right? If we suck, everyone’s gonna say it’s our cars that are crap!”